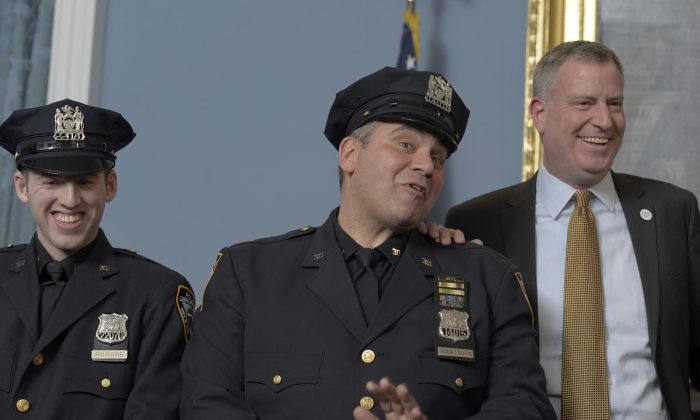 NEW YORK—Police officers Michael Konatsotis and David Roussine were honored by the mayor and the police commissioner at City Hall Monday. But their real reward came in form of a little girl’s burp.

Konatsotis and Roussine responded to an emergency call on the Upper East Side at 2:10 p.m. Saturday. Two anxious parents waved them down on the sidewalk. Jason Schechter was holding his 15-month-old daughter Norah.

Her body was limp. She wasn’t breathing. Her eyes were open. Her face was turning blue.

Konatsotis took the child in his arms and told Roussine to drive to the hospital. With the parents in the back of the cruiser, Roussine turned all the lights and sirens on and hit the gas.

Meanwhile, Konatsotis, who became a police officer after working as an emergency medical technician, cradled Norah in his arms and gave her rescue breaths.

The cruiser arrived at the hospital in 70 seconds.

Just Part of the Job

“As soon as I gave the last rescue breath, the baby burped. It was the greatest sound that I’ve heard. I know my wife doesn’t [think so],” Konatsotis said, to bursts of laughter from Mayor Bill de Blasio, Police Commissioner Bratton, and the crowd present at the City Hall briefing room Monday.

Once at the hospital, Konatsotis handed the baby over to hospital staff that continued to care for her. As the baby came to and began to cry, the shaken parents and the police officers also broke into tears.

The officers took off their collar brass, small badges showing their precinct number 30, and handed them to the parents. They invited Norah and her parents to visit them at the precinct when the girl grows up.

At City Hall, the mayor praised the officers for their training and effective response, calling them heroes. He noted that all NYPD officers have cardiopulmonary resuscitation (CPR) training.

“You have shown once again why the NYPD is called New York’s finest. You’ve literally saved a life,” de Blasio told the officers.

The officers in turn, noted that helping others is just part of the job. “We do this job day in and day out. We’re human and we saw this child out there. Any police officer would act the way we did,” Konatsotis said.

Mandatory Curfew for Minneapolis, St. Paul After Days of Destruction
0