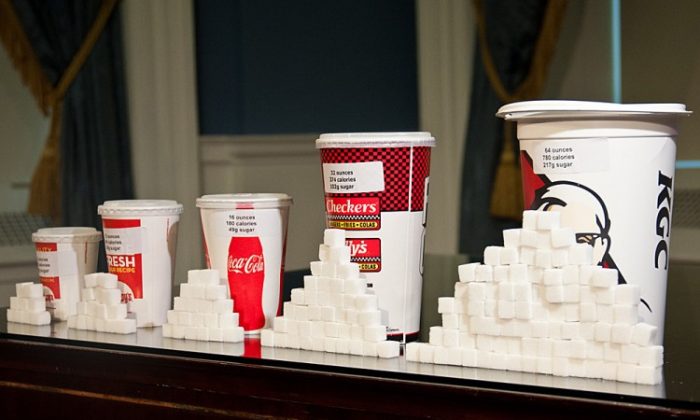 Dr. Thomas Farley, commissioner of the city's Health Department, speaks at a briefing on a new proposal by the mayor's Obesity Task Force to ban the sale of large-sized sugary drinks at restaurants in New York City. (Christian Watjen/The Epoch Times)
US

NEW YORK—A task force created by Mayor Michael Bloomberg is recommending a ban on the sale of large-sized sugary drinks at food establishments in the city. This is an effort to combat the obesity epidemic, according to a City Hall briefing Thursday. If the city’s Board of Health approves the ban, it would be the first of its kind in the nation.

The proposal suggests that the maximum size for sugary drinks be 16 ounces.

“The industry is very smart. … They can figure out how to go back to 16 ounces,” said Howard Wolfson, deputy mayor for government affairs and communications. “If they do that, we can save lives.”

The new rule would apply to packaged products as well cups served in restaurants. Sugary drinks are all drinks with more than 25 calories per 8 ounces. A customer who wants more than 16 ounces would have to purchase more than one drink.

The goal of reducing beverage sizes is to come back to “human-size” portions, rather than the supersize portions championed by places like McDonalds, and thus encouraging a reduction of calorie intake as part of a citywide initiative to encourage healthy eating.

In New York City, 40 percent of children and 58 percent of adults are obese or overweight. The medical costs for city residents amount to $2.7 billion each year, not counting social costs. Obesity is the leading cause of preventable death and takes a toll of 5,800 lives in the city every year.

“Americans consume about 200–300 percent more calories per day on average than they did 30 years ago,” said Dr. Thomas Farley, the city’s health commissioner, at City Hall.

He cited recent studies that have linked consumption of sugary drinks with development of diabetes and heart diseases.

The sizes of soda bottles and drinks sold at fountains have increased dramatically over the last decades. For example, the size of sugary drinks at McDonald’s restaurants has grown by more than 450 percent in 50 years, Farley said.

Such a change would require an amendment of the city’s Health Code. Wolfson compared this measure to banning lead in paint and pointed out that there has been much criticism of the city’s health measures like banning smoking in public places. However, they subsequently gained popularity and have been adopted by other U.S. cities.