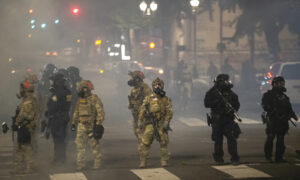 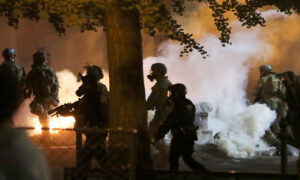 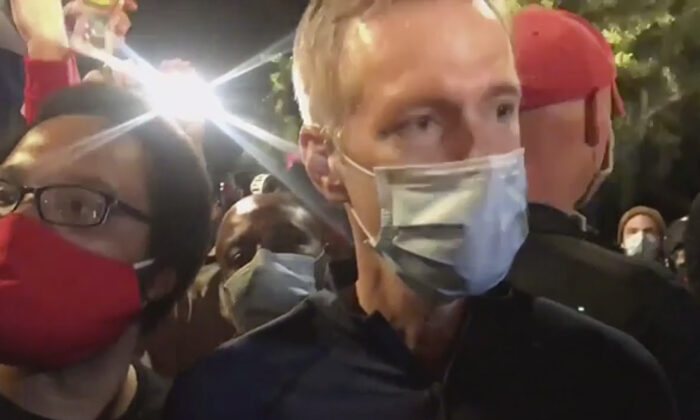 Portland Mayor Ted Wheeler (R) stands at a fence guarding a federal courthouse as tear gas drifts by, in Portland Ore., on July 23, 2020. (Karina Brown via AP)
US News

Portland, Oregon, Mayor Ted Wheeler was among those tear gassed after rioters set fires near a federal courthouse in the city.

Wheeler, a Democrat who also serves as the city’s police commissioner, joined a crowd of more than 1,000 people who gathered July 22 outside the Mark O. Hatfield Courthouse before fires were ignited nearby. The rioters also repeatedly tried to rip down fencing that federal officers erected earlier in the day to try to protect the federal facility.

“I’m not going to lie, it stings. It’s hard to breathe. And I can tell you with 100 percent honesty, I saw nothing that provoked this response,” Wheeler told a reporter.

“This is flat-out urban warfare, and it’s being wrought on the people of this country by the president of the United States,” he said. One photograph shows Wheeler standing next to fencing with a fire raging near the courthouse in the background.

Wheeler later removed his mask while talking to a demonstrator who was inches from his face, in violation of Gov. Kate Brown’s mask restrictions. Brown last week ordered state residents to wear masks if they can’t maintain six feet of distance from other people amid the COVID-19 pandemic.

Wheeler was soon escorted from the scene by a private security detail as rioters shouted at him. “[Expletive] you!” some yelled.

Earlier in the night, the mayor addressed the crowd. He finished speaking at around 10:30 p.m. and went to stand at the fencing.

“Soon after Mayor Wheeler finished addressing the crowd, people in the group began throwing flares and other incendiaries over the fence that protects the west side of the federal courthouse. Over the next 45 minutes, people continued to throw flammable material as well as incendiary devices over the fence, eventually starting a large fire. Other people breached the fence while others kicked and shook the fence,” the Portland Police Bureau stated in an incident summary.

That’s when federal officers first emerged from the building. Firing tear gas and using other crowd-control devices, they dispersed the mob and repaired the breach.

The crowd later gathered again outside the courthouse and one individual threw a flaming item into the courthouse. Portland police declared a riot at 12:31 a.m., “due to the violent conduct of the large group creating a grave risk of public alarm.”

A sound truck showed up and officers inside announced the declaration of the riot over loudspeakers. The vehicle was assaulted by rioters and sped away.

The majority of the crowd ignored the warnings and stayed outside the courthouse, hurling Molotov cocktails and hundreds of other projectiles and starting more fires. Rioters committed at least one assault and multiple acts of vandalism, including on fire hydrants, wasting several hundred gallons of water, before the crowd dissipated.

Wheeler’s police force continued taking a stand-off stance to the riots, which unfolded near the Justice Center, a county building that includes a police precinct. Wheeler and other members of the City Council voted on July 22 to bar police officers from working with federal law enforcement.

“With the exception of the sound truck, Portland Police were not present during any of the activity described. Portland Police did not engage with any crowds and did not deploy any CS gas. No arrests were made by Portland Police,” the bureau said in a statement.

Federal officers made at least one arrest.

The officers were sent to Portland on July 4 because the existing staffing at the courthouse was inadequate to respond to the riots, acting Homeland Security Secretary Chad Wolf told reporters this week.

State and city officials are trying to get federal officers to leave, claiming they’ve escalated the violence. Trump administration officials such as Wolf challenge that assertion, pointing to the fact that the violent demonstrations date back to early May.