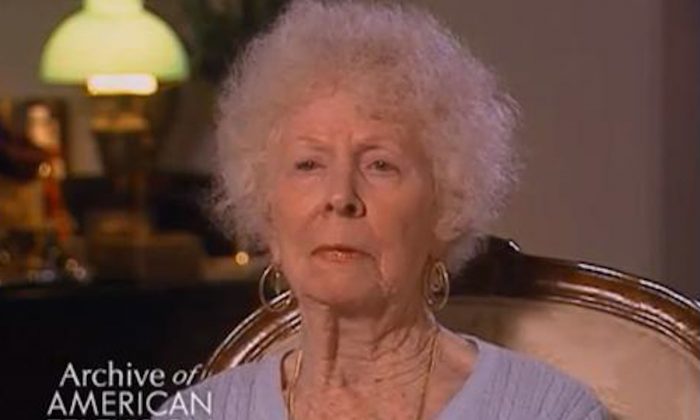 Maxine Stuart dies: Known as the star of famous Twilight Zone episode, “The Eye of the Beholder,” and for her roles in The Young and the Restless and The Wonder Years, Maxine Stuart died June 6 in Beverly Hills at the age of 94.

In “The Eye of the Beholder,” Stuart played the main character whose face was covered with bandages. But, she explained in an interview with the Archive of American Television, she was not pretty enough to play the woman whose face is revealed at the end, and another actress, Donna Douglas, replaced her for the scene. Douglas is best known as as Elly May Clampett in The Beverly Hillbillies.

“It was reasonable of them,” Stuart said, “but it was certainly an irony in light of the fact that it [the episode] was about conformity.”

She said she always had trouble crying on screen, feeling the immediate demand, but she cried freely under the bandages, unexposed.

Stuart won a Primetime Emmy in 1989 for Outstanding Guest Actress in a Comedy Series for her role as Kevin’s piano teacher, Mrs. Carples, on The Wonder Years. She was also nominated for a Soap Opera Digest Award for Outstanding Female Newcomer in 1994 for her role in The Young and the Restless, according to the International Movie Database (IMDb).

Her career began in New York theater, though it veered toward television. She has appeared in some movies, such as “Fun With Dick and Jane.” Her most recent appearance was as the character Jane on “Judging Amy,” in 2003.