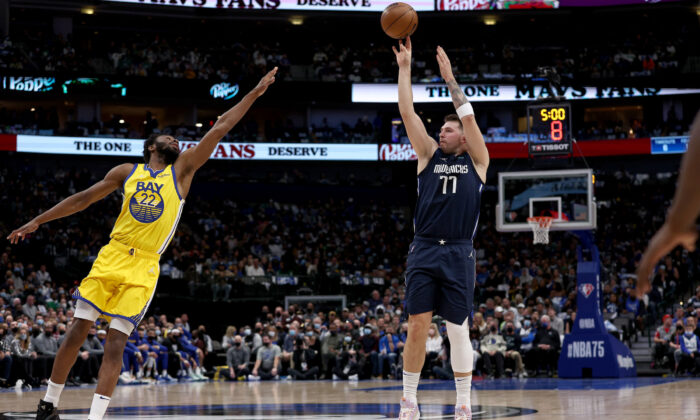 Luka Doncic #77 of the Dallas Mavericks shoots the ball against Andrew Wiggins #22 of the Golden State Warriors in the first quarter at American Airlines Center, in Dallas, on Jan. 5, 2022. (Tom Pennington/Getty Images)
NBA

With the recent return of their best player, Luka Doncic, they were missing their other top player. Kristaps Porzingis entered COVID-19 safety protocols as Doncic came out. Dallas was successful from the three-point and free-throw lines, while holding the Warriors to their season low.

Luka Doncic scored a game-high 26 points for Dallas on 7 of 18 shooting, seven rebounds, eight assists, and two steals; he also made 10–12 free throws.

“The last couple games, our defense has been phenomenal. We we held Golden State to 82 [points]. That’s unbelievable. They they’re [the] number one or two team in the NBA. So I think that’s unbelievable for us,” said Doncic.

Golden State is tied with Phoenix with the best record after losing just the eight games of the season. Coming off his worst performance of the season, the slump continued for Stephen Curry. He was held to 14 points on 5 of 24 attempts, just 1–9 from threes, nine rebounds, and five assists.

“The body of work over the course of this year’s been pretty solid,” said Curry. “This stretch has not been great, not up to my standards. So you’ve just to stick to the program. It’ll come around.”

The Warriors were led by Andrew Wiggins with 17 points on 7–13 shooting, three rebounds, and two assists. Gary Payton II added 11 points, and Juan Toscano-Anders came off the bench for nine.

For the Mavs, Dorian Finney-Smith had 17 points and nine rebounds. Jalen Brunson scored 15, and Tim Hardaway Jr. came off the bench for 14 points.

The first quarter finished tied at 21. Dallas then dominated the second quarter outscoring the Warriors by 11 for a 50–39 halftime lead.

Momentum changed as Dallas had a nearly six-minute drought at the beginning of the third quarter, giving the Warriors a 61–56 lead after Payton II’s dunk off of Curry’s assist, with 5:48 remaining in the quarter.

Golden State would then go on a scoring drought of seven minutes that ended early fourth quarter, allowing Dallas to regain the lead 73–69 after Reggie Bullock’s three-pointer with 10:41 left in the fourth quarter.

The Warriors would come within one point, 75–76, with Curry’s basket with 8:19 remaining. They would, however, have another drought of nearly four minutes, as the Mavs scored the next 13 points to extend the lead to 89–75, with 4:11 left, on Finney-Smith’s free throw.

Dallas closed out the victory 99–82, but had a big scare as Doncic turned his right ankle as Curry drove past him to the lane with 1:19 left to play. Doncic had been sidelined much of the season with knee and ankle injuries.

“I think it’s good,” said Doncic. “Just turned it a little bit by myself. It’s quick, limited pain, but I’ll be fine.”

Mavericks travel to play Houston on Friday and the Warriors finish a back-to-back Thursday at New Orleans.

Doncic wore “41 forever” on his shoes in honor of Nowitzki’s jersey retirement. “He did everything for Dallas,” said Doncic, complimenting Nowitzki. “He deserves this and everything that happens to him. He was one of the best. But one thing that stands out for him, he’s a great person. He is one of the most humble superstars ever.”

Nowitzki is considered the best European player of all-time. He was the the league MVP in 2007, and he led the Mavericks to the NBA championship in 2011 as Finals MVP. He was also a 14-time All-Star and is sixth in all-time scoring.

Golden State’s tribute video to Nowitzki played during a third-quarter timeout. There were recorded messages from Curry, Klay Thompson, Kevon Looney, Andre Iguodala, and a joke from Draymond Green.

“An icon,” Curry said of Nowitzki. “He did it his way, playing with the same franchise for 21 years. Just what he meant to the city, to this organization. He opened up the gates for international players to believe they could have amazing careers in the NBA and give them confidence.”

Nowitzki received a statue of himself, and made a 20-minute speech that included thanking his wife and three children. He added a message for his children: “I always tell you guys, find your passion in life and work hard, and great things can happen,” Nowitzki said.

“My teammates, I had almost 200 of them,” said Nowitzki. “That’s a lot. Obviously way too many to mention, but I always try to respect everybody, have fun with everybody, not see myself as a bigger part of the puzzle. Always try to make everybody feel welcome. That was my style of leadership, always joking around with everybody. I think this sums [it] up a couple years ago. I won the Twyman-Stokes Award for teammate of the year. You know how many teammates voted for me at the time? None. So that meant a lot. That meant a lot to me.”