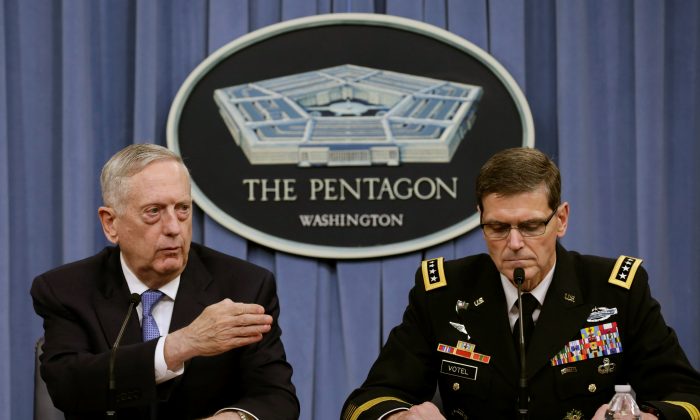 WASHINGTON—Tensions between the United States and Russia will not “spiral out of control” following last week’s U.S. cruise missile strikes on a Syrian air base, Defense Secretary Jim Mattis said on Tuesday, describing it as a one-off response to Syria’s use of banned chemical weapons.

President Donald Trump, in his biggest foreign policy decision since taking office in January, ordered the strikes after concluding that Syria waged a nerve gas attack in rebel-held territory that killed 87 people, many of them children.

Russia, which has advisers on the ground aiding Syrian President Bashar al-Assad, warned the U.S. strike could have serious consequences. Syria denies involvement.

“It will not spiral out of control,” Mattis told reporters at the Pentagon.

“I’m confident the Russians will act in their own best interest and there is nothing in their best interest to say they want this situation to go out of control.”

Mattis has repeatedly warned that the U.S. military remained ready to act again should Assad use chemical weapons, saying on Tuesday that Assad would “pay a very, very stiff price.”

At the same time, he acknowledged that Trump had only authorized the single attack, meaning the U.S. military would not automatically have the authority to strike again should Washington determine another case of chemical weapons use.

Mattis also said the U.S. military’s focus in Syria was still fighting the ISIS terrorist group, not becoming entangled in Syria’s messy civil war between Assad and his opponents.

“The rest of the campaign stays on track exactly as it was before Assad’s violation,” Mattis said.

The incident has chilled U.S. relations with Moscow after a presidential campaign during which Trump frequently called for an alliance with Russia to fight ISIS terrorists in Syria and Iraq.

It has also led the Trump administration to harden its attitude against Assad weeks after top U.S. officials said they were more concerned with defeating ISIS terrorists than getting Assad out of power.

“I don’t see a peaceful, stable Syria in the future that has Assad in charge,” White House spokesman Sean Spicer said on Tuesday. “I don’t see a future Syria that has (Assad) as the leader of that government.”

U.S. Secretary of State Rex Tillerson denounced Russian support for Assad as he prepared to fly to Moscow on Tuesday.

“It is clear to us the reign of the Assad family is coming to an end,” Tillerson told reporters in Italy.

U.S. intelligence indicates that Syrian Su-22 aircraft taking off from Shayrat airfield delivered the nerve agent sarin, according to a White House report given to reporters.

Mattis said there was no doubt that Damascus was responsible.

Although some U.S. officials have strongly hinted they suspect Russia, which has a presence at Shayrat, may have known something about the planned attack, none have conclusively linked Moscow to the incident itself.

Mattis suggested the United States did not have firm evidence that Russia had foreknowledge or was complicit in the chemical attack.

“It was very clear that the Assad regime planned it, orchestrated it and executed it and beyond that we can’t say right now. We know what I just told you, we don’t know anything beyond that,” Mattis said, when asked whether Russia had a role.