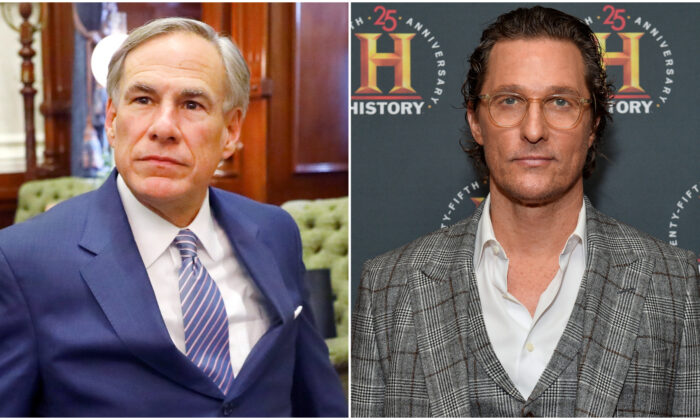 Actor Matthew McConaughey announced on Nov. 28 that he won’t be running for Texas governor in 2022, following months of speculation.

In a video posted to Twitter, McConaughey, 52, acknowledged that he had explored politics and considered a gubernatorial run but that ultimately, he’s decided to focus his efforts in the private sector instead.

“As a simple kid born in the little town of Uvalde, Texas, it never occurred to me that I would one day be considered for political leadership. It is a humbling and inspiring path to ponder. It is also a path that I’m choosing not to take at this moment,” the actor said.

McConaughey said that he would instead “invest the bounty I have to support the entrepreneurs, businesses, and foundations that I believe are leaders.

“Establishments that I believe are creating pathways for people to succeed in life. Organizations that have a mission to serve and build trust, while also generating prosperity.”

According to a poll by the Dallas Morning News and the University of Texas at Tyler last week, McConaughey was the preferred candidate among voters over Republican Gov. Greg Abbott and Democratic challenger Beto O’Rourke in head-to-head matchups.

The actor said in March that he was seriously considering a run for governor in his home state, noting that he would adopt an “aggressively centric” approach if he were to run.

“I would say, as far as running, I’m not until I am. So my decision hasn’t changed, because I’m still not. Am I giving it honest consideration? Yeah,” he told the Austin American-Statesman in March. “I’d be a fool not to. And it’s an honorable consideration. I still have to answer the same question for myself and my family. Honestly, is that the truest and best category for me to be most useful? I’m ready to step into a leadership position in this next chapter of my life, but I don’t know that that’s in politics.”

At the time, Abbott, who is up for a third term and has secured the endorsement of former President Donald Trump, said he was taking McConaughey “very seriously” as a potential challenger.

Meanwhile, O’Rourke—who announced his campaign for Texas governor earlier this month—has declined to say if he wants President Joe Biden to campaign for him. It comes amid reports of growing tensions in the West Wing and may signal broader concerns among Democrats that associating with the president could backfire on their chances to secure key positions in 2022.

When asked in a CNN interview if he would welcome Biden to travel to Texas and campaign with him, O’Rourke sidestepped a direct answer, saying his campaign is “not going to be about anyone from outside of our state.”

When asked again, O’Rourke reiterated that his campaign would remain focused on Texas and not national politics.

When asked a final time if that means he wouldn’t want the president to join him in his campaign, O’Rourke said: “It means that I’m focused on Texas and on my fellow Texans. Those are the people most important to me. There’s no politician, there’s no other person from outside of this state who can help to change the course of this election, for better or for worse.”