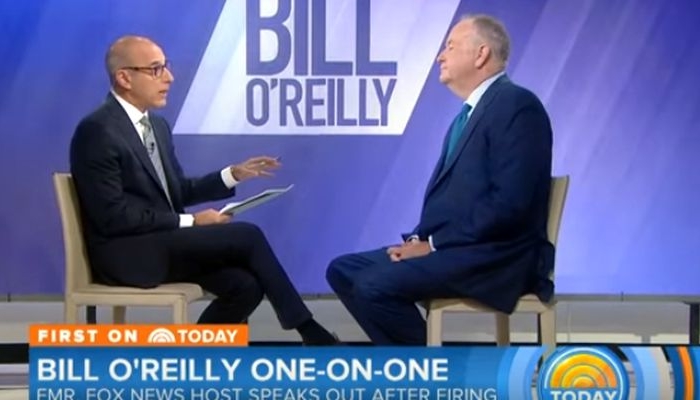 “Today” show hosts announced Lauer’s firing on Wednesday morning, and by Thursday, several reports suggested that he may have engaged inappropriate conduct with several women in the workplace. Notably, The New York Times reported that one woman alleged that in one 2001 incident, he locked the door in his office and sexually assaulted her until she passed out.

Just two months ago, Lauer interviewed O’Reilly after women alleged that he harassed them.

For his part, O’Reilly categorically denied the claims.

“You were accused of sexual harassment,” Lauer, facing across from the longtime Fox host, said in the interview. “You said at the time that you did absolutely nothing wrong, do you stand by that?”

“I do,” O’Reilly responded.

Lauer then opined that he was “probably the last guy in the world [Fox] wanted to fire because you were the guy that the ratings and the revenues were built on.”

“You carried that network on your shoulders for a lot of years, so doesn’t it seem safe to assume that the people at Fox News were given a piece of information, or given some evidence, that simply made it impossible for you to stay on at Fox News?” he added.

But O’Reilly denied the allegations and said he was never accused of misconduct until the claims emerged this year, ending his Fox News career.

The New York Times reported that five women were paid $13 million by Fox not to file lawsuits or speak out about the O’Reilly harassment allegations. The women who made the allegations either worked with him or appeared on his TV program between 2002 and 2016.

O’Reilly, however, said that it wasn’t true. “My conscious is clear,” he told Lauer.

“Nobody’s a perfect person, but I can go to sleep very well knowing that I never mistreated anyone on my watch in 42 years,” O’Reilly said.