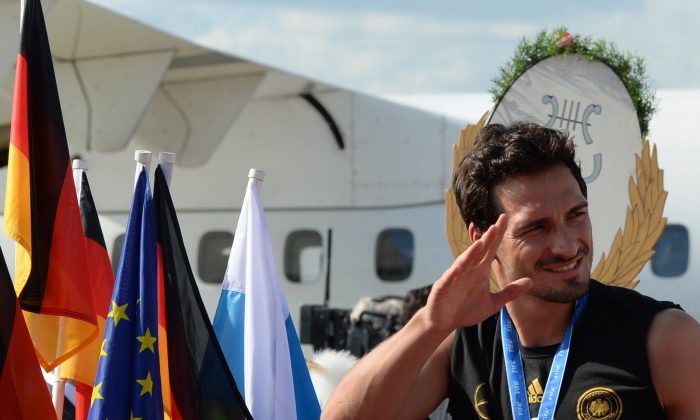 German national football team player Mats Hummels waves after disembarking an airplane at the airport in Munich, southern Germany, on July 15, 2014. After attending a victory parade in Berlin, the Bayern Munich players of the national team and other players living in the South of the country took a plane to Munich, where they were expected by thousands of football fans celebrating the 2014 FIFA Football World Cup title. (CHRISTOF STACHE/AFP/Getty Images)
Soccer

Manchester United may not get a chance to sign Mats Hummels after all.

New Man United boss Louis van Gaal had recently made a £20 million “take-it-or-leave-it” bid for the 25-year-old German, but the Borussia Dortmund man is not interested in a move to the English Premier League this season.

Even worse for Van Gaal, Barcelona has targeted Hummels and Tottenham Hotspur’s Jan Vertonghen, and the Belgium player has recently stated that he wishes to stay at Spurs, according to Express.

“I’ve got more years left at Tottenham and I’m happy,” said Vertonghen, signed a six-year-contract from Ajax in 2012.

“I want to stay so it doesn’t matter who the manager will be.

“The chairman will make a good decision,” added Vertonghen.

Sky Bet has given odds of 1/2 for Hummels to join Manchester United, and 8/1 to join Barcelona.

United Germany Stands at the Top of the World

RIO DE JANEIRO (AP) — United they stand, right at the top of the football world.

And right on South American soil.

Germany won its fourth World Cup title on Sunday, but its first since a country torn apart by political divisions at the end of World War II was finally glued back together.

“It was always my dream to get on the summit and look down,” said Miroslav Klose, a Polish-born Germany striker who is a perfect example of the country’s unification and its diversity. “Incredible.”

The Germany victory at the iconic Maracana Stadium was special for another reason, too. The Germans became the first European team to win a World Cup in the Americas, coming after they humiliated host Brazil 7-1 in the semifinals and then got the best of Argentina and Lionel Messi 1-0 in the final.

Along the way, Klose set the record for World Cup goals, scoring his 16th in the rout over Brazil to push himself ahead of Brazil striker Ronaldo.

Klose didn’t score on Sunday at the Maracana, however. Instead, it was the man who replaced him in the 88th minute, Mario Goetze, that did.

Goetze’s moment of brilliance, chesting the ball to control it and then volleying past Argentina goalkeeper Sergio Romero deep in extra time, was just another sample of the teamwork that has lifted this tightly knit Germany setup to the top.

“The team did it beautifully,” said Manuel Neuer, voted the best goalkeeper of the tournament. “At some point we’ll stop celebrating, but we’ll still wake up with a smile.”

After winning the World Cup title in 1954, West Germany turned itself into a powerhouse on the field. The west side of the divided nation later won the 1972 European Championship and then the 1974 World Cup, playing as the host.

Another European title came in 1980, followed a loss to Italy in the 1982 World Cup final. The West Germans again reached the final in 1986, but lost to an Argentina team led by Diego Maradona in Mexico. They got their revenge four years later, beating the Argentines in 1990 to win the World Cup for a third time.

Their lone major title as a united country came at Euro 96, when they beat the Czech Republic in the final at another of football’s grandest venues, Wembley Stadium. But they have come very close many times since, losing to Brazil in the 2002 final and reaching the semifinals in both 2006 and 2010.

Argentina has now come up short against Germany in three straight World Cups. The Argentines also lost to the Germans in the quarterfinals at the last two tournaments.

“This was our chance, and we felt that way,” said Argentina midfielder Javier Mascherano, perhaps the team’s most important player behind Messi. “We couldn’t do it. We have to lift our head and suffer the pain.”

For Brazilian fans, still hurting after the drubbing by Germany and still sad about the broken back that ruled Neymar out of the final games of the World Cup, Sunday’s result comes with a sigh of relief.

The five-time champions have now hosted the World Cup twice, and come up short both times. In 1950, Brazil lost to Uruguay in the final match, forever known around here as the Maracanazo. This year, after getting trounced by Germany, many Brazilians believed a win for Argentina, Brazil’s biggest rival, would have hurt almost as much.

Germany, by way of Goetze’s goal in the 113th minute, took care of that problem.

“You just shoot that goal in, you don’t really know what’s happening,” Goetze said. “And then at the end of the match, having a party with the team, the whole country … it is for us, a dream come true.”

This time, it’s for all Germans.