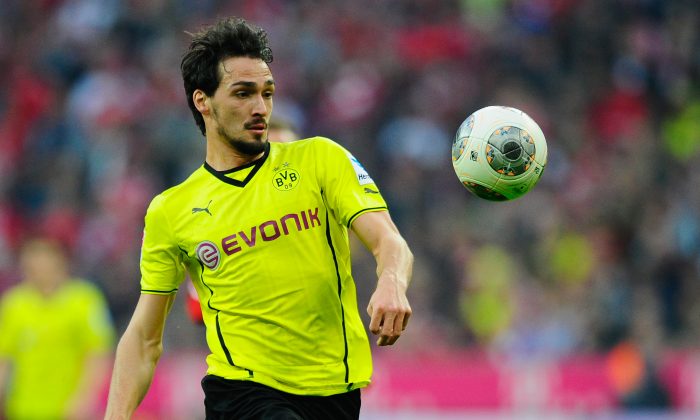 Mats Hummels of Dortmund in action during the Bundesliga match between FC Bayern Muenchen and Borussia Dortmund at Allianz Arena on April 12, 2014 in Munich, Germany. (Photo by Lennart Preiss/Bongarts/Getty Images)
Soccer

The 25-year-old German international and Borussia Dortmund defender has been linked with Manchester United and Barcelona all summer.

Man United boss Louis van Gaal even reportedly made a £20 million “take-it-or-leave-it” bid for Hummels during the World Cup 2014 period.

However, Dortmund manager Klopp has declared that neither Hummels nor Marco Reus are leaving the German club this summer.

“I can assure everyone that there are no signs that those two players want to leave,” Klopp said on the Uhr show.

“Marco and Mats will play for us the next season.”

Klopp added: “What are we talking about today? Mats to Manchester United? For how much? €20 million ($26.9 million)?

“With those kind of sums can you forget that straight away.”

Man United, who are badly in need of a replacement center back after veteran defenders Rio Ferdinand and Nemanja Vidic left the club towards the end of last season, will have to start looking elsewhere, or maybe go for a bigger bid.

Earlier, Sky Bet gave odds of 1/2 for Hummels to join Manchester United, and 8/1 to join Barcelona, but since the announcement, the Red Devils are now 1/6 to sign Hummels, and Barcelona are 6/1.