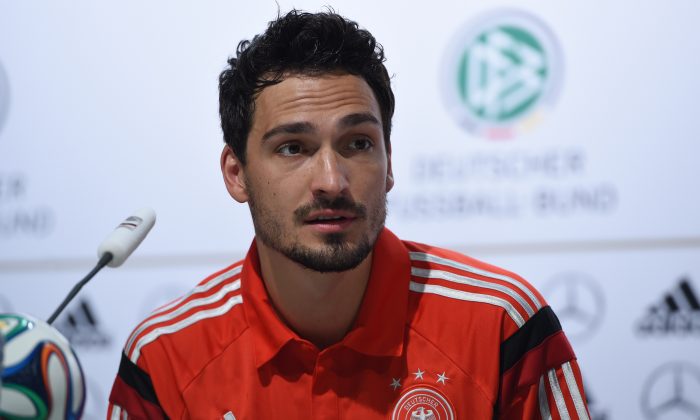 Manchester United could be making one final attempt to sign Mats Hummels.

The Red Devils have been courting the 25-year-old German international for three seasons now without success.

Man United have been looking to sign some proper defensive cover now that incumbents Rio Ferdinand and Nemanja Vidic have left Old Trafford, and current defenders Chris Smalling, Phil Jones, and Jonny Evans are not up to the mark yet.

United have also been linked with Stefan de Vrij and Thomas Vermaelen.

Hummels had earlier declared that he will one day play in England, but doesn’t think he will move this summer.

RIO DE JANEIRO (AP) — Substitutes have made a big impact at the World Cup, and there could be more of them in four years’ time.

FIFA’s coaching advisers will propose before the 2018 World Cup kicks off that teams can use a fourth substitute in extra time.

“I think that’s an idea that we will put” to football’s rules-making panel, Gerard Houllier, a member of the FIFA technical study group, said at a briefing on Wednesday.

Up to three replacements are currently allowed, even when knockout matches go to 30 extra minutes after scores are level in regulation time.

“It’s a good idea. Only in extra time. Maybe if someone is injured, why not?” the former France coach said.

So far, substitutes have scored 29 goals after coming off the bench in Brazil, already a World Cup record with eight matches left to play. The previous mark was 23 at the 2006 tournament in Germany, FIFA said.

“Substitutes play such an important part because they come with a freshness and attitude,” Houllier said. “Nearly a quarter of (all) the goals have been scored in the final 15 minutes of the game.”

Those goals by subs have often been game-changing, rather than additional scores in blowout victories.

Klaas-Jan Huntelaar came on late when the Netherlands were losing 1-0 to Mexico in the round of 16 on Sunday. Huntelaar teed up Wesley Sneijders for an 88th-minute leveler and then scored the decisive stoppage-time penalty.

On Monday, Belgium could not beat inspired United States goalkeeper Tim Howard until substitute Romelu Lukaku was sent on in extra time, and quickly set up Kevin De Bruyne for the equalizing goal, then scored the second in a 2-1 win.

The Americans also got a decisive late goal in its opening group match from defensive replacement John Brooks.

FIFA has asked Houllier’s group to propose ideas to football’s rules panel, which is known as IFAB.

The panel was denied the chance to approve a fourth sub at its annual meeting in March 2012, when FIFA withdrew the proposal.

Houllier suggested it should now be revisited.

“At this World Cup everything is going so quick, so fast, the tempo has been so high,” he said. “As a technician we would like to have in extra time the possibility to have another substitution.”