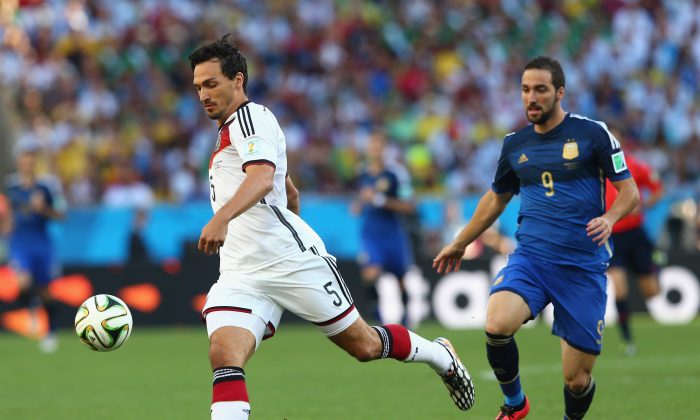 Mats Hummels of Germany controls the ball against Gonzalo Higuain of Argentina during the 2014 FIFA World Cup Brazil Final match between Germany and Argentina at Maracana on July 13, 2014 in Rio de Janeiro, Brazil. (Photo by Martin Rose/Getty Images)
Soccer

Barcelona are going to make a move for Mats Hummels.

The German defender had an excellent World Cup 2014. Hummels kept the Germans solid at the back, and was not afraid to make the occasional marauding run forward, with one run made past the half way line in the Brazil-Germany semi final being a memorable instance.

New Barcelona boss Luis Enrique would have certainly noticed Hummels’ performances, and is looking to bring him to Camp Nou, according to reports in Spain.

Also, with Barca not looking likely to sign Marquinhos from PSG or Jeremy Mathieu of Valencia, and with the departure of long-time center back and captain Carlos Puyol, Hummels is looking more and more likely like a perfect replacement.

If Enrique manages to sign Hummels, it would mean that Manchester United, who have long targeted the Borussia Dortmund man to replace Rio Ferdinand and Nemanjic Vidic, will have to start looking elsewhere for defensive cover.