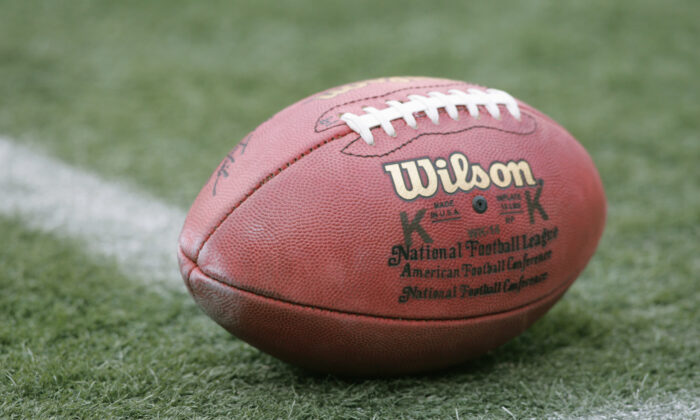 A general view of the ball taken during the game between the Oakland Raiders and the New York Jets at Giants Stadium in East Rutherford, New Jersey on Dec. 18, 2005. (Jim McIsaac/Getty Images)
Southern California

SANTA ANA, Calif.—The family of a former player for the heralded Mater Dei High School football team is suing the school for negligence, alleging he was severely injured in a team hazing ritual known as “Bodies” in which two players repeatedly land body punches on each other until one surrenders, it was reported Nov. 24.

The lawsuit, filed Tuesday in Orange County Superior Court, accuses the team’s head coach, Bruce Rollinson, of having an “outrageous” dismissive attitude about the “dangers created by Bodies,” the Orange County Register reported.

“This is especially true in light of the fact that the administration and coaches at Mater Dei valued the school’s status as a nationally recognized football powerhouse over the health and safety of its minor athletes,” the suit states, according to the Register.

The suit alleges negligence, negligence per se-hazing in violation of California penal code, negligent failure to warn, train, or educate, intentional infliction of emotional distress. In a statement to the Register, Mater Dei officials said, “An independent, thorough investigation was conducted. We are unable to comment further due to the involvement of minors.”

Rollinson did not respond to the paper’s requests for comment.

According to the paper, the then-Mater Dei player took part in the Bodies ritual in February, squaring off against a teammate who was 50 pounds heavier. The smaller player—identified only as Player 1—suffered a traumatic brain injury, two gashes over his right eye, one over his left eye, and a broken nose that required surgery, according to the Register, which reviewed four police reports, surgeon’s reports, medical records, emails from Mater Dei, letters, forms, records, memos, two videos, and court filings.

Player 1 later withdrew from Mater Dei. The other player involved, Player 2, remains on the team.

According to the Register, court documents contend that Rollinson told Player 1’s family that he was in a “bind” in terms of disciplining Player 2, because that player’s father is a volunteer coach for the team.

The paper reported that Mater Dei officials initially declined to cooperate with Santa Ana Police Department investigators looking into the fight, and during later interviews with police, denied hazing existed in the Mater Dei football program.

The Orange County District Attorney’s Office declined to file any charges over the fight that led to Player 1’s injuries, saying in part that it viewed the altercation as a case of mutual combat, the Register reported.