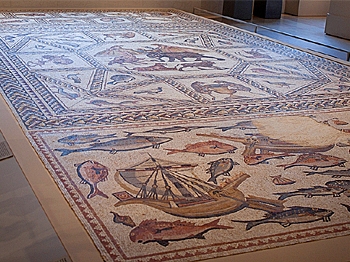 MASSIVE FIND: A well-preserved mosaic dating back to Roman-ruled Israel in the fourth century on display at the Metropolitan Museum of Art. (Henry Lam/The Epoch Times)
US

By Tara MacIsaac
biggersmaller
Print
NEW YORK—On display beginning Wednesday at the Metropolitan Museum of Art for the first time ever is a, well-preserved mosaic 50 feet by 27 feet unearthed near Tel Aviv, Israel, where it is thought to have been the floor of a wealthy Roman in the fourth century.

As workers widened the road from Jerusalem to Tel Aviv in 1996, they discovered this work of art. They proceeded to rebury it until it could be properly excavated, a feat that was only recently accomplished.

It was found in a town called Lod, which was first settled around 5000 B.C. A Roman city was built there after the original inhabitants were sold into slavery around the first century. It became an important Christian center until Muslims conquered it in the seventh century. It is not clear, however, what religion if any the Roman who owned the mosaic belonged to.

The mosaic panels do not contain any overtly religious images. Two of the three panels depict animals that were commonly used in gladiatorial games, hinting that the Roman whose floor they donned may have held such games on his estate, according to the Met.

An ocean scene is depicted in the third panel and the absence of human figures is of particular interest to the archaeologists who unearthed it.

The exhibit at the Met, held from Wednesday, Sept. 28 to April 3, 2011, includes footage of the massive mosaic being unearthed. Underneath the stone slabs, archaeologists discovered the original sketches and foot prints of the workers from over 1,600 years ago.