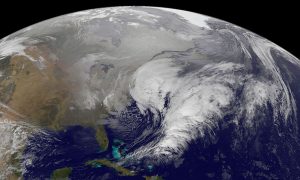 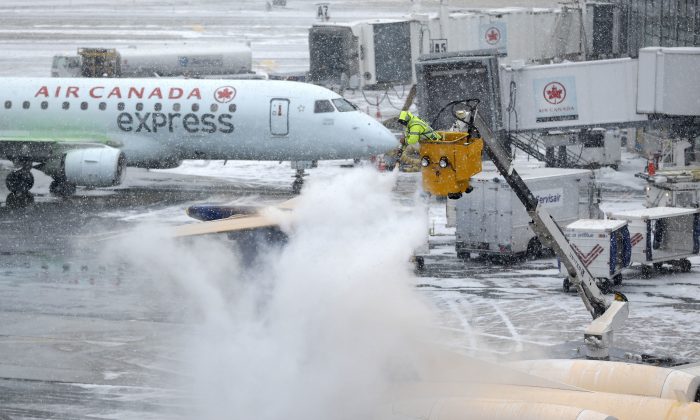 A plane is de-iced during a light snow at LaGuardia Airport in New York on Jan. 26, 2015. Airlines canceled thousands of flights into and out of East Coast airports as a major snowstorm packing up to three feet of snow barrels down on the region. (AP Photo/Seth Wenig)
Blizzard 2015

Winter Storm Juno, being called a blizzard of historic proportions, promised to wreck havoc even before it got going. By Monday afternoon most major U.S. airlines had announced massive flight cancellations for Tuesday.

United Airlines cancelled all flights in New York, New Jersey, Boston, Mass. and Philadelphia, Pa. American Airlines is running on a “very limited schedule” in the Northeast on Tuesday.

The National Weather Service predicts 18 to 30 inches of snow in the New England region. Wind gusts could reach 75 mph in areas near the coastline. Blustery conditions will persist throughout the day Tuesday and into Wednesday morning.

The major airlines also announced that they will waive fees for cancelling or changing passengers’ flights in advance of weather disruption.

United, JetBlue, Delta, and American Airlines were among a list of companies that issued waivers for people traveling to and from cities in the Northeast region, including those further south like Washington D.C. and Baltimore, Md. Winter storm warnings are in effect in parts of Md. and W. Va., but snow accumulation will be light, according to The Weather Channel.