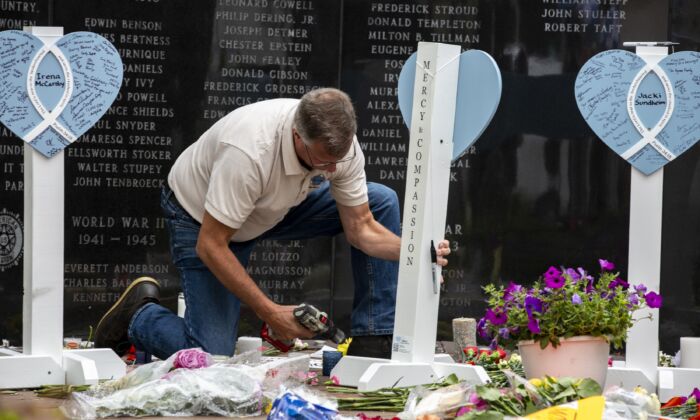 A member of the Lutheran Church Charities assembles a memorial for the victims of a mass shooting at a Fourth of July parade, in Highland Park, Ill., on July 6, 2022. (Jim Vondruska/Getty Images)
Social Issues

Mass Shootings Are a ‘Societal Problem, Not a Gun Problem’: Former FBI Agent

On the heels of another deadly mass shooting, people are looking for the culprit of the problem and searching for solutions.

The number of mass shooting incidents reported and verified this year has surpassed 325. Fifteen of these incidents resulted in death. The most recent occurred on the Fourth of July, when Robert Crimo III fired upon a parade in Highland Park, a suburb of Chicago, killing seven people and wounding several others. Before his arrest, the 21-year-old shooter “contemplated” a second attack in Wisconsin.

In an effort to curb so-called “gun violence,” the Senate approved bipartisan, landmark measures aimed at keeping firearms out of the hands of dangerous people. While Shaffer agrees that certain people should not possess a firearm, he said he “cringes” when he hears the term “gun violence.” Without a person pulling the trigger, a firearm doesn’t have the ability to discharge, he said.

“Guns don’t cause violence; people cause violence.” And the root cause of it all, he said, is the fact that “evil exists” and sick people are increasingly less subject to authority and appropriate treatment.

As a result, Shaffer said, people need to practice “situational awareness” of not only their surroundings but also the people they’re in contact with on a regular or incidental basis.

“We are living in a very dangerous world,” Shaffer said. “Violent crimes are on the rise.” This year, a half dozen major cities will likely outpace last year’s record levels of violence crime, Fox News reported. These include Atlanta, Baltimore, Los Angeles, New York City, Philadelphia, and Washington.

Shaffer encourages every law-abiding citizen—absent of mental issues—to carry a firearm for protection. “You just never know when you’ll need it in today’s world.” But more than that, he said, “not being aware of who and what’s going on around you is like walking around with blinders on and asking for trouble.”

Because most violent offenders are “cowards looking for the weakest targets,” Shaffer said it is important to stay alert and vigilant. “Always have a plan, and play the ‘what if’ game,” he said. “What would you do, if in this moment, this happened?” It could be mean being approached by a stranger or being interrupted by a dangerous perpetrator at a busy establishment. “What are you going to do when, all of a sudden, things go violent?”

Shaffer admitted that what he finds most difficult in his job as a risk manager and security consultant is “getting good people to understand that evil exists.” Most people have never been a victim of violence, so they think it’s never going to happen to them, he said.

“We have to come to the realization that we live in a more dangerous world, but most people don’t want to come to that realization,” Shaffer said, adding that “it’s too uncomfortable of a thought to think the country is getting worse rather than better.”

According to Shaffer, the “crazy” Highland Park shooter could have been a likely candidate for a mental institution. But he said mental facilities have been largely removed from treating the mentally deranged. “America just doesn’t have the facilities it once had to treat these kinds of people,” he said.

Since the 1960s, the United States has transitioned away from institutionalizing mental health facilities in state psychiatric facilities and relied on a community-based system of mental health care. According to some, this has brought about a “mental health crisis,” creating a system that “overtreats the worried well and vastly undertreats the seriously mentally ill.”

Crimo’s mental state was oblivious to those closest to him or they were completely ignored, Shaffer said.

Friends recently said Crimo was on a “downward spiral,” but family turned a blind eye to his condition. It was reported that he struggled with suicidal thoughts and self-harm for up to 6 years. “If anyone should know their son the best,” Shaffer suggested, “it would be the father and mother.”

As recent as 2019, police reports suggested that Crimo was suicidal and had threatened his family on multiple occasions. A collection of knives was removed from his home, posing a “clear and present dangers” according to Illinois State Police. Yet, he was able to attain an Illinois gun license with his father co-signing the application because he was under 21.

Reasons for an Uptick in Violence

Shaffer recognizes that many are searching for the reasons for the violent crime surge, calling their effort “a real difficult topic to discuss.”

“Where is God?” and “where are the fathers in the family?” he asked. “Many kids no longer fear God, no longer have a healthy family structure, and are often accountable to no one.”

Evangelist Franklin Graham said, “We have taken God out of schools and most homes are leaving God out of the rearing of their children.” Regarding fathers in the family, the National Center for Health Statistics reports a divorce rate of 2.3 per 1,000 of the population. Nearly a quarter of children under the age of 18 in the United States live with one parent and no other adults. And that leads to millions of children living in fatherless homes

Shaffer summarized his explanation for violent crime in America: “No God figure, no father figure, no accountability, [and] no treatment.”

Solutions Contributing to the Issues

While most people who own guns are law-abiding citizens who do not present serious mental health concerns, “there are many others walking the streets of America with access to firearms, whose mental health has been seriously harmed,” according to Schaffer.

“Rather than receiving the appropriate healthcare because it’s essentially not available anymore, they’re often getting pumped with selective serotonin reuptake inhibitors (SSRI),” he said.

Shaffer pointed out that “many of these medicines are supposed to prevent depression and suicide, but the side effects listed in the package insert say they can cause anxiety, depression, and suicidal ideation.”

According to Shaffer, it begs the question: “If this is the case, how do you treat a mental health issue when the potential side effects are the exact same problem being treated?”

A 2015 report cohort study stated that selective serotonin reuptake inhibitors (SSRI) were “modestly associated” with violent crime in participants aged 15-24 “but not significant for individuals aged 25 and older.”

A current FDA warning also states: “Pediatric patients being treated with antidepressants for any indication should be closely observed for clinical worsening, as well as agitation, irritability, suicidality, and unusual changes in behavior, especially during the initial few months of a course of drug therapy, or at times of dose changes, either increases or decreases.”

As a result, Shaffer said, “The United States needs to take a seriously hard look at these things.”

Guns Are Not the Problem

Firearms have been part of America since its founding, according to Shaffer. Up to 44 percent of American households are in possession of a gun. The average owner of a firearm possesses five of them. And Shaffer said, “the proportion has been the same throughout the course of American history.”

Shaffer said, “Guns have always been out there but what’s new are all these mass shootings and active shootings.” Ultimately,” he said, violent crimes are “a societal problem, not a gun problem.”