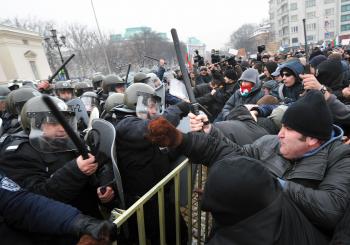 By Kremena Krumova
biggersmaller
Print
SOFIA, Bulgaria—During protests in Bulgaria beginning Jan. 14, twenty buses with nearly 1000 policemen gathered at the National Parliament building in Sofia, the capital, to disperse almost 2000 people protesting against the government. At least 17 protestors and six police officers were injured in the clashes, according to AFP.

The BGNES news agency reported that protesters were throwing snowballs and heavy stones, injuring policeman and smashing windows of nearby shops. More than 50 protestors have so far been arrested, while ambulances are periodically transporting injured citizens to hospitals, in an atmosphere that is becoming more and more tense.

Clashes started after Sofia Mayor Boyko Borisov issued a ban of anti-government protests. He said he did so after receiving word from the Ministry of Interior that a bomb will be exploded at the square before Parliament, during the protest.

Mass protests initiated by student, ecological, political, rural and other civic groups unsatisfied with government policies are planned to be held on Jan. 14, 15 and 16 in front of the Parliament, the Council of the Ministers, and President’s office.

Bulgaria, a recent member of the European Union, is currently being ruled by a triple coalition consisting of the Bulgarian Socialist Party, the liberal-oriented National Movement Simeon II (named after King Simeon Koburg-Gotha, who is chair of the party) and the Movement for Rights and Freedoms (lead by Muslim minority representatives).

According to Reuters, 70 percent of the 7.6 million population of Bulgaria want the government brought down, while 75% do not approve of governmental policies, due to lack of progress in fighting against corruption.

Last year, Transparency International, an international anti-corruption group, declared Bulgaria the most corrupt country in the European Union, as well as the poorest.