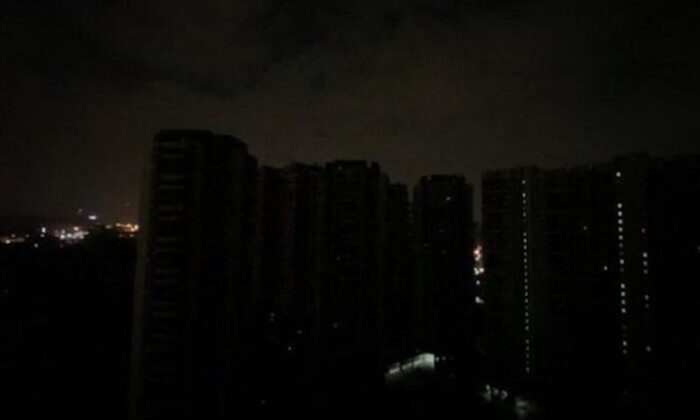 Guangzhou city in Guangdong Province, China in complete darkness due to power outage on Dec. 21, 2020. (Screenshot from Weibo)
China Society

Major cities in China’s southern Guangdong Province experienced sudden widespread blackouts on Dec. 21. The power outages lasted for more than an hour, causing panic among residents. Amid the power usage restrictions enforced by several provinces since last week, the recent incident fuels concern about China’s energy crisis as coal imports from Australia have been banned due to trade disputes between both countries.

From midnight until 1 a.m. on Dec. 21, mass power outages put several major cities in Guangdong, including Guangzhou, Shenzhen, Foshan, Dongguan, Zhongshan, Huizhou and some parts of Zhuhai, in complete darkness.

The Guangdong Power Supply Bureau sent out a notice later that day, which stated that at around midnight [on Dec. 21], some residents in Sanyuanli and Luochongwei of Guangzhou city were affected by “equipment failures”; and the Bureau restored electricity after more than an hour of emergency repairs.

The sudden power outage caused many residents to panic as local authorities did not give any warning in advance. Many mainland Chinese netizens posted photos and comments on social media platform Sina Weibo in the early morning hours of Dec. 21. The phrases “Guangzhou power outage” and “Guangzhou mass blackouts” received over 50 million views and over 1.8 million clicks on Weibo, according to a report by Radio Free Asia (RFA). The blackouts caused utilities to shut off.

Water was cut off in many cities as the power outage shut off water pumps. Some netizens reported that the water supply was cut off at midnight. A Guangzhou resident told Apple Daily that she called the service hotline of the Power Supply Bureau and the local China Southern Power Grid said it was a “grid failure.”

Some netizens took photos of the city streets that were in complete darkness and shared the images on social media platforms.

Baiyun district of Guangzhou city went completely dark, with water and internet cut off. A Baiyun resident, surnamed Zeng, said in an interview with RFA that the local power outages had occurred many times recently, but they rarely happened in the past. She believes the power outages are caused by a coal shortage.

After China announced on Dec. 12 that it had begun banning imports of Australian coal amid a growing trade spat between the two countries, Chinese authorities took measures to curb electricity usage due to a coal shortage, according to a report by Hong Kong newspaper Apple Daily. Coal is the main source of energy for Chinese power plants, and Australia is the second-largest coal exporter to China. The two countries are in a trade dispute following Australia’s demands for an international investigation into the origin of the COVID-19 outbreak in China.

Netizens in Guangzhou’s Liwan and Baiyun districts reported that the local mobile phone signal was interrupted for 10 to 20 minutes, as many base stations were affected by power outages. The internet, electricity and water supply were also cut off. They also said that hospitals, nursing homes, and school dormitories in some neighborhoods were affected.

The state-owned power company, State Grid Corporation of China, has announced earlier this month that due to the record breaking electricity usage in the mainland, several provinces across the country have successively curtailed power supply. State Grid in Hunan has announced that it has entered a “wartime status” for power supply.

Last week, China’s Development and Reform Commission in Zhejiang, Hunan and other provinces issued notices to restrict power usage among residents and small businesses. The insufficient power generation is not only disrupting people’s daily lives but also affecting industries, RFA reported. Furthermore, the authorities seem to be downplaying the severity of the situation by describing power outages as “interrupted load” and “orderly use of electricity.”