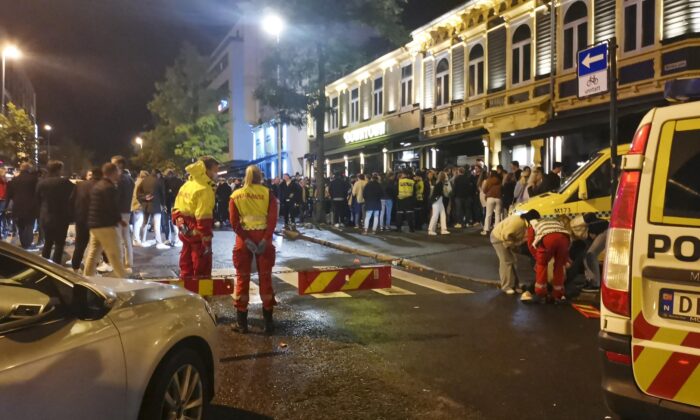 An ambulance takes care of the injured as Norway reopens from COVID-19 restrictions in Trondheim, Norway, on Sept. 25, 2021. (Joakim Halvorsen/NTB via AP)
WORLD

Norwegians took to the streets over the weekend to celebrate an end to the country’s CCP virus restrictions after government-imposed measures limited people’s social interactions for about 18 months.

The Norwegian government announced on Sept. 24 that most of the remaining COVID-19 restrictions would be scrapped beginning on Sept. 25, and that life in the nation of 5.3 million would return to normal.

“It has been 561 days since we introduced the toughest measures in Norway in peacetime,” outgoing Prime Minister Erna Solberg said at a news conference. “Now the time has come to return to a normal daily life.”

Rowdy celebrations in the Nordic European nation erupted on Sept. 25, with thousands of citizens across Norway taking to the streets and partying until the early hours of Sept. 26.

“There was a significantly greater workload than during the summer. There were a lot of people out already in the afternoon and it continued during the night,” Rune Hekkelstrand, a police spokesman in Oslo, the capital of Norway, told the Norwegian public broadcaster NRK.

Police said they responded to dozens of reports of unrest and violent clashes in the country’s major cities after streets, bars, restaurants, and nightclubs were filled with people celebrating the end of the CCP (Chinese Communist Party) virus restrictions.

Solberg justified the move to reopen society by saying that Norwegian health experts had supported the decision.

“We shall not have strict (coronavirus) measures unless they are professionally justified. People must be allowed to live as they wish,” Solberg told Norwegian newspaper VG late Saturday.

Norway is the second country in the Nordic region to lift COVID-19 restrictions after Denmark did so on Sept. 10.

Nearby Sweden also announced earlier this month it will remove most of its COVID-19 restrictions on Sept. 29.