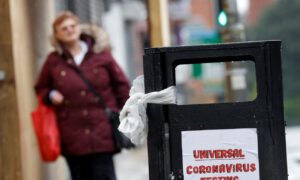 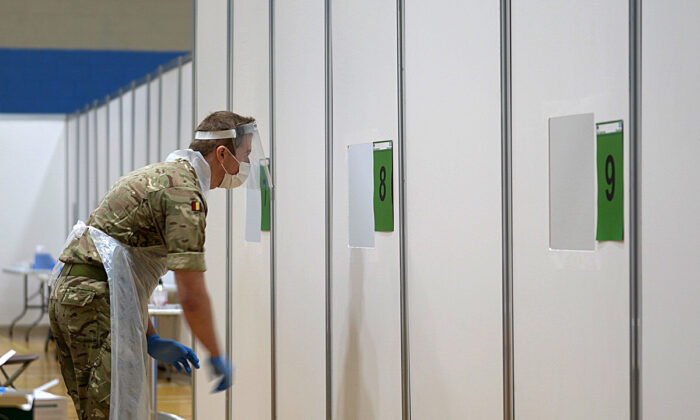 A soldier conducting CCP virus tests on members of the public at a testing centre at Croxteth Sports Centre in Liverpool, England, on Nov. 7, 2020. (Christopher Furlong/Getty Images)
UK

Following a pilot in Liverpool, 67 local authorities in England will be the first to start mass CCP virus testing programmes as early as Monday, the government said on Saturday.

The Department of Health and Social Care (DHSC) said that over 1.6 million rapid-turnaround lateral flow tests would be immediately deployed to these local authorities.

The number of local authorities running community testing programmes is expected to reach over 100 with a further roll-out in the new year.

The DHSC said that the participating local authorities had created their own testing plans based on local data and demographics.

Health Secretary Matt Hancock said he was “really pleased” to make the announcement after “the successful work” in Liverpool.

“With one in three people with coronavirus showing no symptoms, increased community testing is a vital additional tool at our disposal to help identify those who are infected and infectious, but unaware that they might be spreading the disease,” Hancock said.

“Community testing will be very important in helping the areas where levels of the virus are highest to drive down infection rates and ultimately will help areas ease tougher restrictions,” he added.

“This is just the start, and we are working quickly to roll out community testing more widely as soon as more local teams are ready. I urge all those living in areas where community testing is offered to come forward and get tested.”

Hancock has attributed the result to residents following restriction rules and the recent mass-testing pilot in Liverpool.

Medical journal the BMJ on Friday published the latest of a series of editorials criticising the large-scale use of lateral flow tests.

The BMJ said that the lateral flow test can’t rule out CCP virus infections due to its low accuracy rate and lack of knowledge of who is actually infectious.

“In the field evaluation in Liverpool, compared to PCR tests, these tests picked up 5 out of 10 of the cases PCR detected and more than 7 out of 10 cases with higher viral loads, who are likely to be the most infectious,” the article quoted a government statement as saying.

The article said studies showed that the detection rate was 73 percent when the tests were carried out by skilled nurses, but only 58 percent when they were done by Boots test centre employees. The same figure can be found in the FAQ section of the Liverpool City Council’s (LCC) website.

Around 2,000 troops were deployed to Liverpool in November to help with the pilot. According to the LCC website, residents can visit a test centre or order a home test kit.

The BMJ also said that both scientists and politicians have mixed up having “high viral load” with being “infectious,” a correlation it said was wrong.

“It’s still unclear how viral load and ease of viral culture from people with PCR positive results relate to level of infectivity,” the BMJ said.

Prime Minister Boris John said on Nov. 23 that people in Liverpool who came into contact with someone who tested positive for the CCP virus could be tested daily for a week and carry on as normal if they test negative, instead of self-isolating for 14 days.

“If successful, this approach will be extended across the health system next month, and to the whole of England from January.”

However, as of Dec. 12, this had not been included in the NHS’s guidance for self-isolation.

The DHSC didn’t respond to a request for comment.