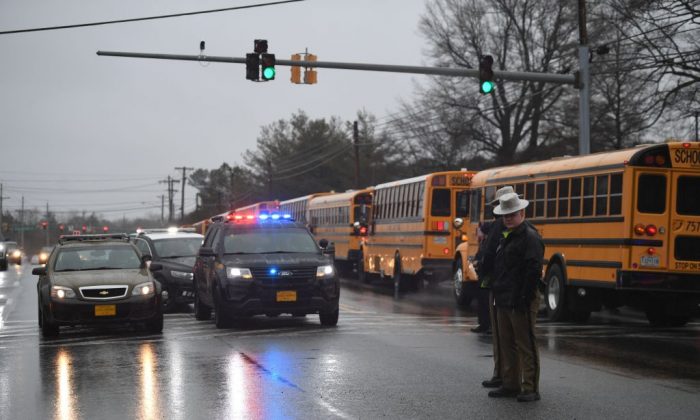 School buses, security and State Troopers are seen on March 20, 2018 at Great Mills High School in Great Mills, Maryland after a shooting at the school. (Jim Watson/AFP/Getty Images)
Crime and Incidents

A self-inflicted gunshot wound, not a bullet fired by a sheriff’s deputy, killed a 17-year-old who had just shot another student at a Maryland high school last week, authorities have said.

Austin Rollins, a student at Great Mills High School, shot Jaelynn Willey, 16, with his father’s handgun in a hallway at the school last Tuesday, according to the St. Mary’s County Sheriff’s Office.

Willey, who had been in a relationship with Rollins that had recently ended, died days later.

About three minutes after Rollins shot Willey, sheriff’s deputy Blaine Gaskill fired one round at him, striking his gun. At the same time, Rollins shot himself in the head, the sheriff said in a brief statement on Monday.

Rollins was wounded and died at a hospital. Gaskill was unharmed.

Desmond Barnes, a 14-year-old student, was struck in the leg by the same bullet that hit Willey, the sheriff said. Barnes was treated at a hospital and released a day after the shooting.