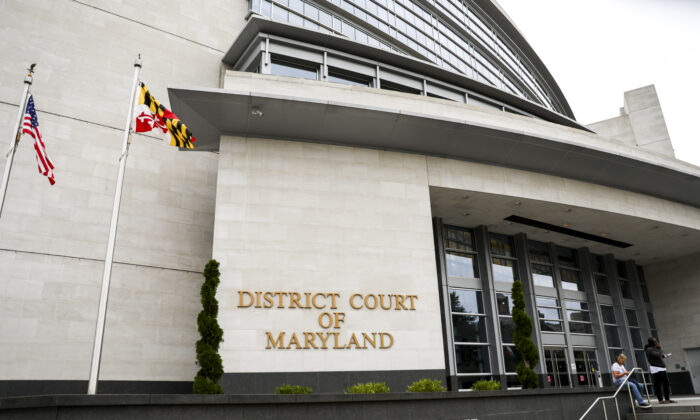 A Maryland state judge died by apparent suicide on Sept. 10, shortly before he was set to be arrested at his home on federal charges of sexual exploitation of a child, officials said.

Caroline County Circuit Judge Jonathan Newell, 50, was pronounced dead at 6:43 a.m. on Sept. 10, the Department of Justice said in a statement.

FBI agents had visited Newell’s residence to arrest him on a federal criminal complaint filed on Sept. 9. When they arrived, they found him “suffering from an apparent self-inflicted gunshot wound,” according to the statement.

Maryland State Police will lead the investigation into the apparent suicide.

Newell was facing one federal charge of sexual exploitation of a child, according to court records unsealed on Sept. 10 (pdf).

According to a federal affidavit, Maryland State Police responded to a call to Newell’s cabin in Fishing Creek on Hoopers Island, Maryland, on July 23 regarding a minor who had found a video camera in the cabin’s bathroom.

The minor took photos of the camera—which was facing toward the shower and flashing with a green light—and called his parents. Shortly afterward, police arrived and interviewed two minors.

One of the minors said the two had spent the night at the cabin, along with a man and four other boys.

Newell waived his Miranda rights and agreed to be interviewed by police, telling them that 10 “members” had access to the cabin and that they would “come and go.” He also denied placing a camera in the bathroom or even noticing one was there.

After the interview, he went to his bedroom to make some phone calls. While in his room, investigators said they noticed him reaching under his bed multiple times before placing his right hand in a fist to his mouth. They then heard a ” loud, distinguishable, crunch sound” from Newell’s mouth and suspected that he may have ingested evidence, because a memory card from a box with camera equipment appeared to be missing.

The following day, investigators escorted Newell to a nearby hospital for CT scans, and doctors discovered that he had ingested a metallic object, according to the affidavit.

The object appeared to be an “18 mm linear possibly metallic foreign body within the small bowel,” doctors said.

Authorities executed search warrants at Newell’s cabin, truck, boat, and office and seized numerous digital devices. They also found a hard drive in a safe at Newell’s residence with numerous videos of minor boys showering. A forensics team is currently examining all of the digital devices.

“In some of the videos, Newell is seen setting up the camera in the bathroom,” the affidavit reads.

Other video footage shows Newell appearing to check several of the minors’ bodies for ticks while in the bathroom. Several youths told FBI agents that Newell had checked their naked bodies for ticks when they had been to the cabin.

Newell was appointed to the Caroline County judgeship in 2016 following a “thorough vetting process” by Gov. Larry Hogan.

Before that, Newell had been the county’s state attorney since 2003. He had been on leave for more than a month prior to his death.

In a Sept. 10 statement, the Maryland judiciary said it had been informed of Newell’s “sudden death” and “has no further details and is unable to provide further comment.”