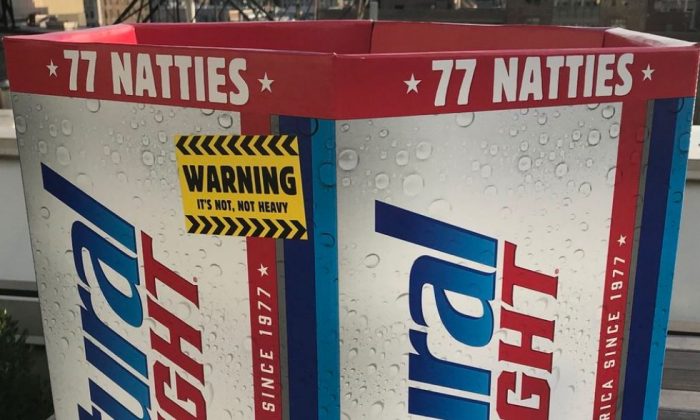 A 77-pack of beer from Natural Light is causing controversy in Maryland. (Natural Light)
Companies

A top Maryland official is criticizing the recent release of a huge 77-beer pack by Anheuser-Busch, saying it promotes heavy drinking.

The company recently unveiled the 77-pack, which includes a plastic lining to hold ice that will help keep the beer cold.

The pack is only being sold in College Park, Maryland, where the University of Maryland is located.

The same people who are fabricating concerns over the public health implications of craft beer consumption are now targeting college kids for the distribution & sale of 77-packs of beer at $0.39 per can. The hypocrisy of these people is just unbelievable. https://t.co/TpVhIVXnWh

Comptroller Peter Franchot, who is responsible for the taxation and regulation of alcohol in Maryland, spoke out against the 77-pack.

“The big brewers like Budweiser who are selling 77 cans of beer for .39 cents each to college kids, they don’t like craft brewers, unless they own them,” Franchot said.

Anheuser-Busch has not commented on Franchot’s criticism or why it chose College Park to roll out the special 77-pack.

77 PACKS HAVE OFFICIALLY TOUCHED DOWN IN COLLEGE PARK pic.twitter.com/7CKAteA9sU

Despite the criticism, the 77-packs were selling quickly soon after being introduced.

“It was selling out as our guys were delivering it off the trucks,” Eric Best, general manager for Bob Hall LLC, a beer distributor based in Upper Marlboro, told the Baltimore Sun.

Best said Natural Light chose College Park because it was one of the first markets for the brand and that it’s remained popular in the area, which is known as a popular party scene.

“We came Monday, Tuesday, Wednesday – all sold out,” one customer at College Park Liquors told Fox 5. “They said that people were camping out from West Virginia, New York, Pennsylvania. It was crazy.”

Another customer, who also chose not to be named, said that the case design attracted people, noting it holds ice on the outside.

“The box is pretty tight and I kind of just drink Natty out of habit,” said another customer. “It’s chug-able.”

“They are just running out of stores,” added yet another. “You would think you were walking into a concert line. I have never seen lines like this anywhere else.”