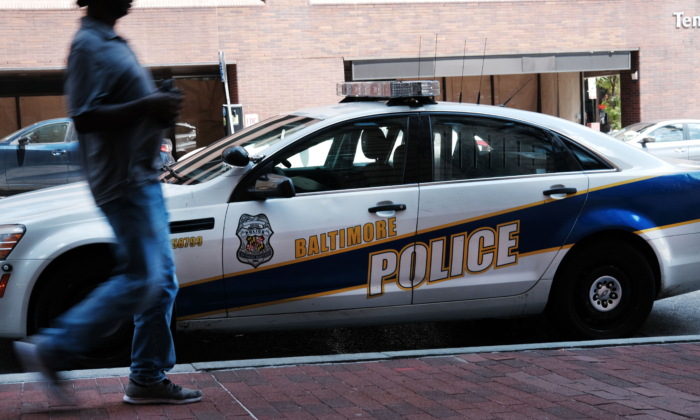 A person walks past a police car on July 28, 2019 in Baltimore, Maryland. (Spencer Platt/Getty Images)
By Ivan Pentchoukov

Maryland was the first state in the nation to adopt the Law Enforcement Officers Bill of Rights in 1974. Twenty states have followed suit, but Maryland is the first to revoke its measure. The bill of rights had set out a due process procedure for probing police misconduct.

Democrats said the measures are long overdue, while Republicans argued they went too far.

The new laws increase the civil liability limit on lawsuits involving police to $890,000 from $400,000. Officers convicted of causing serious injury or death through excessive force would face 10 years in prison.

“It allows for hindsight review of folks sitting in the easy chairs to judge people who made split-second decisions in volatile situations,” when an officer fears for his or her life and the lives of others, Cassilly said.

The news laws make it more difficult to obtain a no-knock warrant and limit the times they can be executed to 8 a.m. and 7 p.m., except for emergencies. One of the measures expands public access to records in police disciplinary cases.

In his veto message, Hogan wrote that he believed the measures would “further erode police morale, community relationships, and public confidence.”

“They will result in great damage to police recruitment and retention, posing significant risks to public safety throughout our state,” Hogan wrote.

The measure is named after Anton Black, a 19-year-old African American who died in police custody in 2018 in a rural town on Maryland’s Eastern Shore.

Maryland has struggled with police accountability problems in recent years. Baltimore’s police department entered into a federal consent decree after Freddie Gray suffered a broken neck while in police custody and died, sparking unrest in the city in 2015. Lawmakers approved some changes the following year, but critics have said they were not enough.

Hogan wrote that two measures would go into effect without his signature.

One of them would create a unit in the attorney general’s office to investigate police-involved deaths and prohibit law enforcement from buying surplus military equipment. The other would enable Baltimore voters to decide whether the state’s largest city should take full control of the police department from the state.

Separately on April 10, the legislature also overrode Hogan’s veto of a bill that would ban sentences of life in prison without the possibility of parole for juveniles.