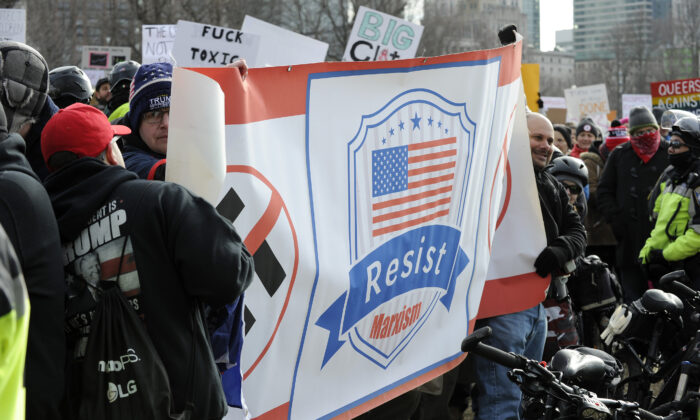 Marxists Use Language as a Political Weapon

Words are used as weapons in political warfare. Chinese communists and some Democrats twist language to control political discourse.

“How strangely will the Tools of a Tyrant pervert the plain Meaning of Words!”—Samuel Adams

Ambrose Bierce was a 19th-century “American newspaperman, wit, satirist, and author of sardonic short stories based on themes of death and horror,” according to Britannica.

One of his best works was “The Devil’s Dictionary,” which lists satirical definitions for commonly used words. Here are a few examples:

Nominee: “A modest gentleman shrinking from the distinction of private life and diligently seeking the honorable obscurity of public office.”

Partisan: “An adherent without sense.”

Politician: “An eel in the fundamental mud upon which the superstructure of organized society is reared. When he wriggles he mistakes the agitation of his tail for the trembling of the edifice. As compared with the statesman, he suffers the disadvantage of being alive.”

Bierce did the rest of us a true service by deciphering the true meanings of words, as the English language is continually being corrupted and misused by certain people, such as Chinese communists and some leftists who delight in concocting words and phrases that sound good when spoken but in reality obfuscate the real intention behind the words. Everything to the Godless Marxists is political, including perverting the English language to further their political ends.

And being the good little Marxists that many Democrats and Chinese communists are, they have taken a page from Marxist dialectics in creating a whole raft of nonsensical words and phrases to hide their objectives, as well as to try to fool people into believing that they have the “true interests” of the people in mind in everything they do. And, of course, nothing could be further from the truth, as a perversion of the language is a standard political tool of totalitarians.

It is no coincidence that there is an overlap in the political language used by both the Chinese communists and the Democratic Party. Both groups have been hard at work bastardizing common language terms for their political use, obfuscating the real meaning of words to camouflage their authoritarian nonsense.

It is time to decipher the true meanings of some of their words and phrases as Bierce might have done in adding to his Devil’s Dictionary.

Affirmative action: Institutionalized racism implemented through the force of government.

Affordable Care Act: Socialized medicine delivered at the efficiency and speed of the Department of Motor Vehicles.

Benefits: The modern word for welfare paid for by someone else.

Climate change (formerly “global warming”): The ruse by which science has been corrupted in order for socialists to gain control of the economy. A psychological phrase that cannot be disputed because the climate constantly changes.

Cooperation: A word commonly used by Beijing to define actions required by other countries without the expenditure of Chinese resources.

Disinformation board: George Orwell’s fictional “Ministry of Truth” comes to real life. A government agency for the suppression of political dissent.

Diversity: A word that promotes divisiveness by pitting racial groups against each other. The opposite of assimilation, which is one of America’s greatest strengths. Diversity can only be measured by quotas. Diversity of thought is not allowed.

Equity: Guaranteed equal outcomes for everyone without considering individual differences or capabilities. Equity can only be achieved through the force of government.

Fact checkers: People paid to lie about that which leftists deem to be inconvenient truths.

Fossil fuels: Replacement phrase for hydrocarbons to imply finite availability of oil and gas, and that we MUST shift to “green energy sources” as soon as possible. Since carbon fuels are a product of nature, there is likely an infinite supply for human use.

Gay: A word contrived in the late 1960s to help legitimize homosexualism.

Human rights: A synonym for genocide frequently used by the Chinese Communist Party.

Mandates: Government requirements implemented without the people’s consent, frequently made to Democrat constituencies at the expense of taxpayers.

New normal: An excuse given by Democrats when their policies fail. “Like it or lump it” is the correct definition, as we are expected to “get used to it.”

Shared future: A favorite communist Chinese phrase that is meaningless but sounds good when uttered.

Social justice: A concept aimed at arbitrarily rearranging society in favor of minorities and the perceived disadvantaged at the expense of “the privileged.”

Social Security. A government-run Ponzi scheme that provides welfare to the aged.

Sustainability: A word used by enviro-socialists that purports to examine policies balanced among the environment, equity, and the economy.

Zero COVID: A communist Chinese euphemism for destroying people’s lives under the pretext of virus control.

The above is merely a starter list of words and phrases that have been corrupted by Chinese communists and other garden variety leftists in recent years to mask their true meanings. There are dozens and dozens more that could be added. To put their word perversions in terms of a virus-related concept that we have learned in recent months, we are victims of gain-of-function manipulations in language, which are imposed virally in public usage that is supposed to enforce and reinforce civic actions and policies that authoritarians deem to be important.

Every phrase spoken by leftists and the Chinese communists requires translation into plain language in order to understand true meaning and intentions. Their Marxist-speak needs to be deciphered with each public utterance made, as their underlying premises are authoritarian to the bone and decidedly not for the benefit of American or Chinese citizens. For the sake of the future of all peoples, we must not acquiesce to their control of the language of public discourse.