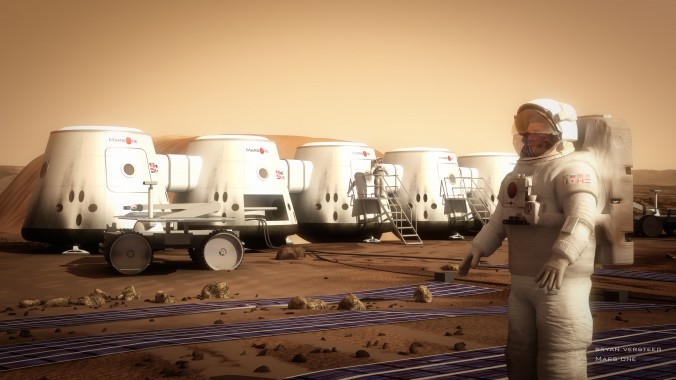 An artist's rendering of the planned Mars One settlement. Mars One is a space mission that aims to establish a human colony on the red planet. (Brian Versteeg/Mars One)
Canada

Mars One: Mission to Mars Narrows Down Astronaut Selection to 1,058 People

The Mars One mission, which aims to put humans on Mars by 2025, has narrowed down its astronaut selection from over 200,000 to 1,058 people, the organization announced on Monday.

“We’re extremely appreciative and impressed with the sheer number of people who submitted their applications,” said Mars One co-founder Bas Lansdorp in a statement. “However, the challenge with 200,000 applicants is separating those who we feel are physically and mentally adept to become human ambassadors on Mars from those who are obviously taking the mission much less seriously. We even had a couple of applicants submit their videos in the nude!”

All the applicants were notified by email whether they made it or not.

The field will be further narrowed down over the next several years through physical and emotional testing.

Mars One has become increasingly well-known after it announced plans this year to begin colonizing Mars by 2023. Those plans have been pushed back several years, but the organization, a combination of a company and a non-profit, has teamed with Lockheed Martin and Surrey Satellite Technology to develop more detailed plans for the mission.

The mission calls for unmanned capsules to be delivered to Mars several years ahead of humans, to help prepare for humans to land. A group of four people would make up the first wave, living in a collection of capsules in a self-sufficient environment. Small groups would join that group every other year, if all goes according to plan.

Among those who made the cut is Justin Semenoff of Saskatoon, Canada.

“Getting the email that I’m going to the next round has just been … my heart’s still beating,” Semenoff told CBC.

The mission is one-way, because Mars One says it would be too difficult to ensure trips back to Earth.

“I’m still excited to push forward with it,” said Samenoff, an army combat engineer in the Canadian Forces. “I’m still looking at it as something that needs to be sought after.”

Overall, 75 Canadian candidates made it to the next round.

Why Are People Applying to Go to Mars and Never Come Back?