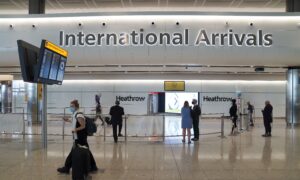 Mark Sutton,42, was a James Bond stunt-double in the opening ceremony of the 2012 London Olympics. He died in a wing suit accident on Wednesday, having hit a mountain ridge, reports the Guardian.

He was one of the world’s top skydivers and stuntmen, said Danny Boyle, the designer for the opening ceremonies. He wrote a tribute to Sutton in the London Evening Standard published Thursday.

Boyle said that Sutton and his skydiving partner in the ceremony, Gary Connery, who doubled for the Queen, “left indelible memories for  people from all walks of life all over the world.”

He described Sutton: “Disciplined and brave in situations most of us would find terrifying, Mark was also a gentle and thoughtful man.”

From Surrey, England, Sutton was in Martigny, Switzerland, when the accident occurred. Swiss police are investigating, reports the BBC.

He jumped from a helicopter at 10,800 feet, according to the BBC. A wing suit allows a diver to glide through the air before deploying a parachute.

Sutton’s jump was being filmed as part of a three-day wing suit event held by Epic TV including about 20 experienced flyers. Sutton set his own course, Trey Cook, the company’s editor-in-chief, told the BBC. Cook said Sutton’s accident was “devastating.”