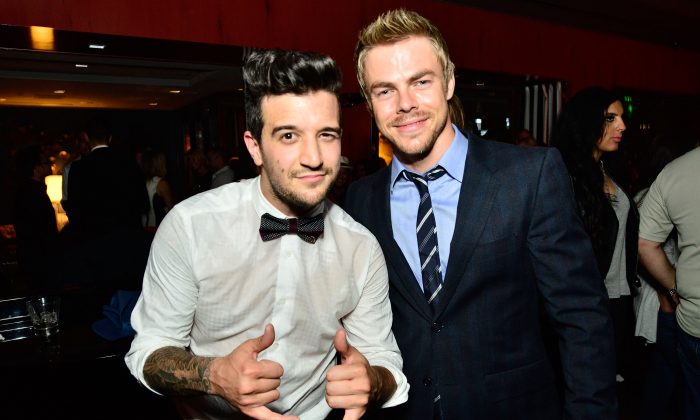 Mark Ballas and Derek Hough: Photos of Best Friends Through the Years

Mark Ballas and Derek Hough are such close friends that they refer to each other as “brothers.”

Ballas, 28, and Hough, 28, started getting close when Derek moved in with Mark and his parents–award-winning Latin American dancers Corky and Shirley–in England.

Mark and Derek started a band, the Ballas Hough Band (originally Almost Amy), in England but it never really took off.

The pair decided to accept invitations to join Dancing With the Stars for season 5 back in 2007, and have been on the show ever since. Derek has won the show five times while Mark has won twice and gotten in the top five six other times, including this year.

Derek recalled in his new book Taking the Lead how he initially got invited to the show after helping his sister out for one week as a guest instructor on season 4.

“Back I went to England. Mark and I were traveling around with our band, Almost Amy, doing the grind. We were focused on the music, and we were very much a team. I didn’t want to just go off to America without him,” he wrote.

“A few months passed and my phone rang again. We were still living with the Ballases, but in a new house. Corky and Shirley eventually divorced, and now we were living with just Shirley. The producers were still interested in me. Like Julianne, they seemed to have a hard time taking no for an answer. I talked to Mark about it. I knew it would be a big transition—relocating my life from London to America. While I was mulling it over, Mark got a call, too. He had sent in an audition tape and they were interested in him as well.”

“‘Dude, if we’re going to do this, then let’s do it together,’ I told him. So that was it. We literally just packed our guitars and one suitcase apiece, and boarded a plane. I was aware that being on a live TV show in front of millions of people every week would likely change my life forever. I went into it very excited but also nervous. I knew a lot of the pros already through the ballroom circles, and I knew how good they were.”

Besides starting a band together, Mark, Derek, and Derek’s sister Julianne–who also lived in London with them–started a dance group called 2B1G, which performed at dance competitions in both the United Kingdom and United States.

“We’d go to competitions — Julianne with Mark and me with my partner — and everyone would go, ‘Oh man.  The brat pack has arrived,'” Derek recounted to TV Guide back in 2007.

Derek and Mark have stayed close friends–along with Julianne–on DWTS, and decided to expand into house flipping recently.

The duo purchased the house in Studio City for $1.275 million and are looking to sell it for $1.895 million, reported TMZ.

HGTV is going to feature the process in a special episode.

Derek and Mark paid at least $200,000 to rebuild the house over eight months.