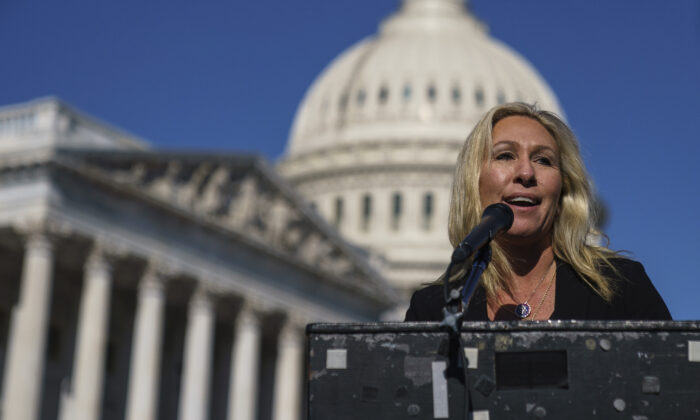 Students of the philosopher Stephen Potter (Gamesmanship, One-Upmanship, etc.) will recall his discussion of “OK words.”

Those are the words that will get you points among the beautiful people and taste-makers you aspire to impress.

They are the OK people who decide what is and isn’t OK to say.

They also perform triage on other people.

For just as there are words that are not OK, so there are plenty of people who are not OK.

In the context of American politics, one of the least OK people is Rep. Marjorie Taylor Greene (R-Ga.).

She is wildly popular in her own state.

But so what? Georgia voters, by and large, are not OK people.

They don’t, according to the OK people making the rules, really count.

As I write, we are being treated to a reality-TV-show-like exhibition of OK scrutiny in action.

The Democrats, taking note of MTG’s popularity among voters, decided to nobble her.

Not by finding a candidate who could beat her in an election.

They understand that that would be difficult to do.

So they took to the courts and decided to accuse her of insurrectionary behavior, a tort that would, under the 14th Amendment, disqualify her from running for office again in 2022.

So far, the courtroom drama has been farcical.

Greene is supposed to have engaged in insurrectionary acts on Jan. 6, 2021, when a mob of pro-Trump protestors, no doubt liberally salted with FBI provocateurs furloughed from their duty of pretending to kidnap Gretchen Whitmer, poured into the Capitol and partied for a couple of hours.

As it happens, Greene’s behavior was completely innocuous.

But then the Democrats insist on describing the unruly protest at the Capitol as an “insurrection” as deadly as 9/11, Pearl Harbor, and even the Civil War.

But with that wild hyperbole under their belt, it was easy to say that Marjorie Greene was herself an insurrectionist.

The courtroom proceedings against Greene were full of comedy gold.

To date, my favorite moment came when a desperate prosecutor asked Greene whether she said, “We aren’t a people who are going to go quietly into the night.”

Why, yes, I did, quoth Greene, as you well know since you just showed a video clip with me saying just that. So what?

Well, proceeded Perry Mason, have you ever seen the movie “Independence Day”?

Yes. Again, so what?

Don’t you recall that the chap who plays the plucky president in the film says just that, right before launching his assault on the aliens?

It was a pathetic performance—the prosecutor’s, I mean, not the chap in the movie.

“We aren’t a people who are going to go quietly into the night.”

Maybe Greene was thinking about that famous Dylan Thomas villanelle “Do Not Go Gentle Into That Good Night.”

Who knows what inspired her?

Maybe she just made it up on the spot.

Maybe she was channeling the chap in “Network”—“I’m mad as hell and I’m not going to take it anymore”—and substituted her own nocturnal variation.

But it gets better.

For the prosecutor went on to deliver a truly magnificent display of linguistic sumptuary presumption.

In order to enforce class hierarchies, some regimes enact laws prohibiting commoners from dressing like toffs.

Our hapless prosecutor has extended the stricture to language.

Well, yes, she replied. And, in fact, it’s right there on the state seal over the judge’s head.

Forget about that, snapped the increasingly desperate prosecutor, you were using it as code!

Apparently, 1776 is only an OK word if you are not someone like Marjorie Taylor Greene.

But what about Nancy Pelosi? Greene later tweeted.

When Botox Nancy announced that the House was drawing up articles of impeachment against Donald Trump, she began by saying, “Let us begin where our Founders began in 1776.”

“Did @SpeakerPelosi,” Greene asked, “use 1776 as a code word to the radical left’s domestic terrorists Antifa/BLM to launch insurrection in the city streets of America in 2020? According to the left, she did.”

As Julie Kelly has noted, our Stasi—more commonly known as the Department of Justice (DOJ)—has been trying the same tactic in their campaign against many of the hundreds of people they have swept up for their participation in, or proximity to, the events of Jan. 6.

It is, of course, supremely farcical, but that doesn’t mean it isn’t also minatory. Stalin’s show trials contained a large element of farce, too, but they tended to end grimly.

It isn’t clear, as of this writing, how Greene’s inquisition will turn out.

But Greene is appearing before an Obama-appointed judge, so who knows?

I suspect Greene will prevail and will go to crush whomever the Dems put up against her in November.

There’s another delicious prospect to savor.

The Republicans are set to take the House, and probably the Senate, in November.

“I bet you,” Greene told Tucker Carlson recently, “we could round up some Republican voters who didn’t like Kamala Harris funding criminal rioters out of jail, or Ilhan Omar, or Cori Bush, or Maxine Waters inciting riots. I think there’s another way to play this game.”

Stephen Potter would have a field day analyzing the gamesmanship coming up.