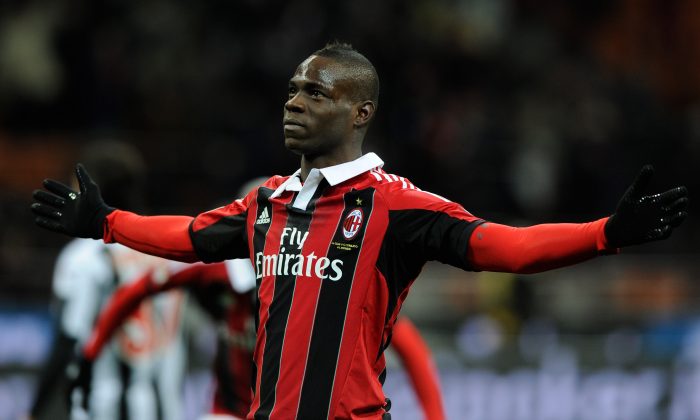 Mario Balotelli of AC Milan celebrates after scoring his second goal from the penalty spot during the Serie A match between AC Milan and Udinese Calcio at San Siro Stadium on February 3, 2013 in Milan, Italy. (Photo by Claudio Villa/Getty Images)
UK

Mario Balotelli has arrived at Liverpool’s training facility at Melwood.

The 24-year-old Italian international was spotted in red t-shirt exiting a car.

Check out the pictures below, as well as Balotelli’s Instagram page.

LIVERPOOL, England—Liverpool could be about to replace one controversial striker with another.

Italy international Mario Balotelli has been lined up by the Premier League club as a potential replacement for Luis Suarez, who left Anfield to join Barcelona for $130 million.

Balotelli, who spent 2½ years with Manchester City up to 2013, left the club’s Milanello training ground on Thursday for possibly the last time.

“Mario Balotelli left Milanello’s sporting center at 1330 (local time) after saying goodbye to his teammates,” Milan said in a statement. “Before going through the gates, he said goodbye to members of Milan’s press office.”

Balotelli scored 14 goals in 30 league appearances for Milan last season. He netted 12 times in 13 matches the previous campaign, helping the team to a third-place finish in Serie A.

Liverpool manager Brendan Rodgers has said he is looking to add a striker to his squad before the transfer window shuts on Sept. 1.

Suarez was sold to Barcelona after being handed a four-month worldwide ban for biting an opponent during the World Cup.