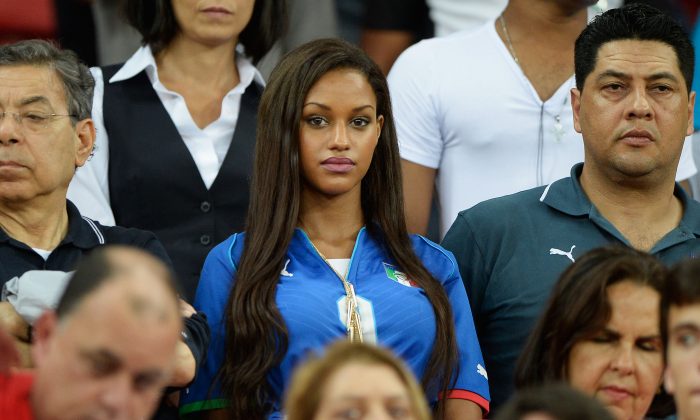 Mario Balotelli’s fiancée Fanny Neguesha to show her support for Italy, and of course, for her soon-to-be husband.

Balotelli proposed to Fanny just before the World Cup, and got an affirmative from his model girlfriend.

“She said yes,” the Italy and AC Milan striker posted on Instagram.

“The most important yes in my life.”

Check out an Associated Press article about Italy and Balotelli.

Balotelli Alone May Not be Enough to Keep Italy In

NATAL, Brazil (AP) — Mario Balotelli alone may not be enough to keep Italy in the World Cup.

Coach Cesare Prandelli indicated that he plans to add Ciro Immobile in attack alongside Balotelli in the Azzurri’s showdown with Uruguay on Tuesday.

“Ciro Immobile is a modern forward who knows how to attack deep, move between the lines and has a feeling for the goal inside the area,” Prandelli said Monday. “He’s a forward who helps the squad.”

“These days every player needs to have all of these characteristics,” Prandelli added. “If you’re lacking even just one of them you’re not a complete player.”

Italy needs either a win or a draw to advance from Group D.

“To reach our goal we have to try and win. We can’t think about drawing,” said Prandelli, who led Italy to the 2012 European Championship final but called this game “the biggest match of my career.”

Midfield maestro Andrea Pirlo, meanwhile, likened the match to “a semifinal or a final.”

“Either you’re in or out,” the passing wizard said as he scratched his scruffy beard.

The blonde-haired Immobile led Serie A with 22 goals for Torino — none of them penalties — before completing a transfer to Borussia Dortmund days before flying to Brazil.

Immobile has only appeared three times for Italy and is yet to score with the national team, although he had a hat trick in an unofficial friendly with Brazilian club Fluminense in the Azzurri’s final warm-up match for the tournament.

Balotelli spearheaded Italy’s attack in a 4-1-4-1 formation in both the 2-1 win over England — when he scored the winning goal — and the 1-0 loss to Costa Rica — when he wasted his two scoring chances.

In the second half against Costa Rica, Prandelli added three more forwards — Antonio Cassano, Lorenzo Insigne and Alessio Cerci — but it didn’t make much of an impact.

“It’s not about the numbers, it’s about the ability to attack the open spaces,” Prandelli said.

Suarez scored both goals in a 2-1 win over England and Italy knows Cavani well since he was among the top scorers in Serie A for seven seasons before joining Paris Saint-Germain a year ago.

“Their attack pairing is one of the strongest in the World Cup,” Prandelli said. “They’re both modern forwards with a feeling for the goal who don’t concede reference points to defenders. We’re going to have to contain them.”

Italy complained about the heat and humidity after its opening two matches and Pirlo noted that there are “two World Cups” being played — “one in the north and one in the south” — referring to some squads who have had cooler conditions.