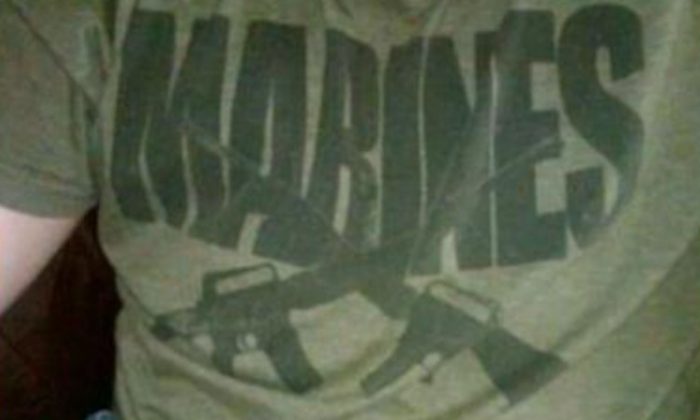 Marines T-Shirt: A screenshot taken of a Fox News broadcast showing the t-shirt that earned a boy at Genoa-Kingston Middle School in Illinois a threat of suspension. (The Epoch Times)
US

It isn’t the first controversial school dress code enforcement that has made headlines across the nation.

Schools are putting increasing emphasis on dress codes, and many are turning to uniforms to end the debate.

Here are five other notable cases of dress-code controversy.

The first important legal case brought against a school for its dress code involved black armbands worn by students during the Vietnam War, according to “Student Dress Codes in Public Schools: A Selective Annotated Bibliography,” by Joan Pedzich, director of library services at Harris Beach law firm in New York.

Mary Beth Tinker, 13 at the time, led a group of students to wear the bands. When school administration enforced a new regulation to prohibit the bands, the Tinker family brought Des Moines Independent Community School District 6 to court. The Supreme Court ruled that the armbands were not a disruption and should be permitted.

Students at Stuyvesant High School protested their school’s dress code, which banned revealing clothing by wearing short shorts to school in June 2012. The dress code forbids “exposure of midriffs, visible underwear, shoulders and lower backs, and mandates that the hemlines of all shorts, skirts and dresses fall below the line of the fingertips,” according to a Huffington Post article from that time.

Some students said the clothing was necessary for comfort in hot weather. One student told NY1: “They’re, like, sexualizing our outfits by telling us what to wear. And like, I don’t know, I guess it’s just more important to learn in school rather than be like persecuted for your dress.”

The Right to Bare Arms

Elizabeth Skerry, 17, started a campaign called The Right to BARE Arms, when Timberlane Regional High School in Plaistow, N.H. forbade bare arms in school, deciding it was a distraction. “In a school with limited air conditioning, for optimum learning to take place, the students need to be comfortable,” stated Skerry’s petition, according to news website Boston.com.

In August 2012, 5-year-old Cooper Barton was made to turn his T-shirt bearing the University of Michigan logo inside out. A statement issued by the school’s superintendent, Karl Springer, said: “Clothing bearing names or emblems of all professional and collegiate athletic teams (with the exception of Oklahoma colleges and universities) are prohibited. In cooperation with the Oklahoma City Police Department Gang Task Force, the policy was approved in 2005 after concerns that nationwide gangs used popular sports clothing to represent individual gangs.” Springer said the administration would review the policy.

Students at Pottsdam Middle School in Pennsylvania were stowing cellphones in their Ugg boots and covertly texting during class, leading the school to ban the boots in January 2012.

Principal Gail Cooper sent a letter home with students on Jan. 19, 2012, stating: “We have been experiencing problems with some students wearing open top boots and carrying items in their boots that are prohibited in school,” according to Pottstown newspaper The Mercury.

The story went viral and gained traction in Australia where the sheepskin lined boots originated.