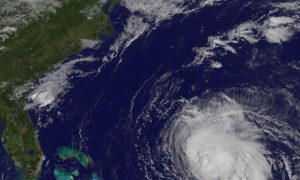 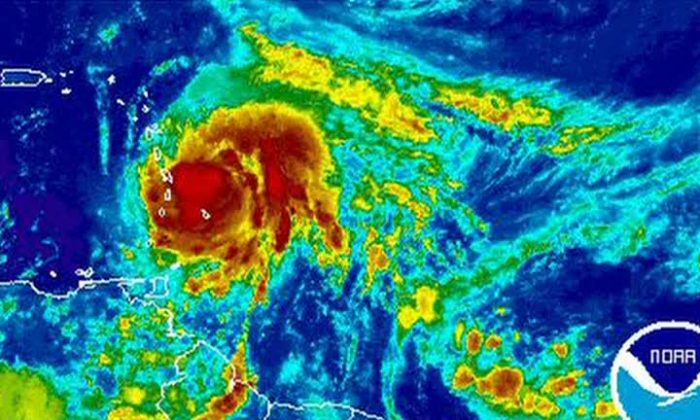 Animation of Hurricane Maria (NOAA)
US

Hurricane Maria picked up strength and roared toward the Leeward Islands on Monday on a track that could whip several eastern Caribbean islands with their second major storm this month.

Maria grew into a Category 3 storm on the five-step Saffir-Simpson scale, with maximum sustained winds of 120 miles per hour (195 km per hour). It was located about 60 miles (95 km) east of Martinique, the U.S. National Hurricane Center said at 11 a.m. ET.

It was headed west-northwest at about 10 mph on a track that would put it over the U.S. territory of Puerto Rico by Wednesday.

Maria was expected to be the second major hurricane this year to hit the Leeward Islands, which were hammered by Hurricane Irma earlier this month, the center said.

Hurricane warnings were in place for Dominica, St. Kitts, Nevis and Montserrat, St. Lucia and the French overseas departments of Guadeloupe and Martinique.

Tropical storm warnings were in effect for Antigua and Barbuda and the Dutch Caribbean territories of Saba, St. Eustatius and St. Maarten, while Puerto Rico, the British and U.S. Virgin islands, and Anguilla were on a watch for hurricane conditions.

Several of those islands were devastated earlier this month when Hurricane Irma rampaged through the Caribbean as one of the most powerful Atlantic hurricanes ever recorded, killing more than 80 people on the islands and the U.S. mainland.

More than 1,700 residents of Barbuda were evacuated to neighboring Antigua after Irma damaged nearly every building there.

Puerto Rico, a U.S. territory which Irma grazed as it headed toward Cuba and Florida, has already begun preparations for Maria. The storm threatened an island already dealing with a weakened economy and fragile power grid.

The eye of that storm was forecast to remain off the east coast of the United States for the next few days, bringing dangerous surf and rip currents to beaches from Delaware through Massachusetts.