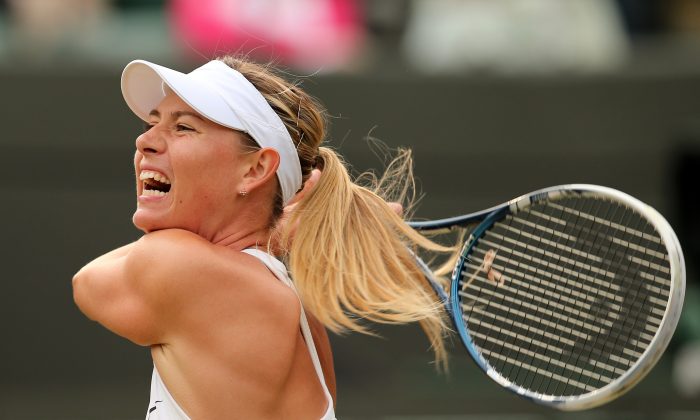 Russia's Maria Sharapova returns to Switzerland's Timea Bacsinszky during their women's singles second round match on day four of the 2014 Wimbledon Championships at The All England Tennis Club in Wimbledon, southwest London, on June 26, 2014. (ANDREW YATES/AFP/Getty Images)
Sports

Maria Sharapova and Alison Riske are set to go head-to-head in a 2014 Wimbledon match on Saturday, June 28.

Given the drawing, 5th seed Sharapova and no. 1 seed Serena Williams look destined to clash in the quarter finals.

The match is being billed as a grudge match of sorts, given that the pair traded words on each others’ private lives.

“I haven’t had a chance to watch too many of Serena’s matches but it doesn’t really matter,” Sharapova told the Guardian.

“If we do get to the stage of playing against each other I’ll be happy to be in that stage, in the quarter-finals.”

“We played each other many times. I haven’t had the best results against her.”

“I always look forward to that opportunity and the challenge to play against the best, to try something a little bit different to try to get a win out there,” Sharapova concluded.

Most bookmakers give Sharapova a 1/10 chance of winning. Alison Riske gets anywhere from 11/2 to 6.