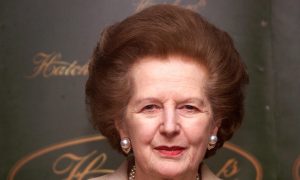 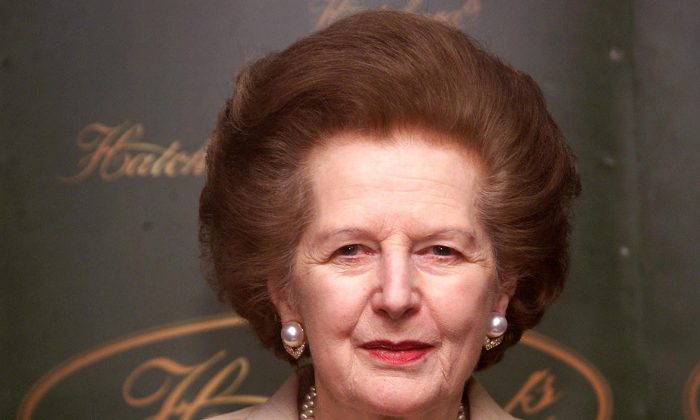 Margaret Thatcher, who died of a stroke on April 8, saw dips and rises in popularity during her three terms as British prime minister from 1979 to 1990. Her political approaches have remained a topic of interest decades after her career ended with her resignation.

The dips and rises in her approval ratings throughout her terms are represented in the support and criticism her policies garner to this day.

She was born Margaret Roberts in Grantham, England, on Oct. 13, 1925. She grew up in an apartment above the grocery store her family operated, according to Bio.com, part of A&E Networks. Her father was a conservative town council member.

She studied chemistry at Oxford University, and worked as a chemist for four years after graduating. She was the president of the Conservative Association at Oxford.

In 1950, she ran for a Dartford parliamentary seat, a bid she knew from the start she would lose to the Labour Party.

In 1952, she began studying law and her twins Carol and Mark were born the next year.

Thatcher won a seat in the House of Commons as a Finchley representative.

She became known as “Thatcher, milk snatcher,” receiving her first bout of popular criticism in public office for abolishing the free milk program at schools as secretary of state for education and science.

Thatcher told the BBC, “I don’t think there will be a woman prime minister in my lifetime.”

Thatcher became the first female British prime minister. The British government was close to bankruptcy and labor union conflicts were on the rise. She controlled inflation by raising interest rates and taxes. She privatized public industries, favored deregulation, and took a hard line against the unions.

Thatcher’s popularity dramatically increased during the first half of 1982, according to The Guardian. In April, Argentina invaded the British territory of the Falkland islands. Thatcher quickly sent troops and regained control of the territory by June.

The Irish Republic Army planted a bomb at the Conservative Conference in Brighton in October, making an attempt on Thatcher’s life. She remained calm and proceeded with the conference.

The opposition harshly criticized Thatcher’s government, and even called for Thatcher’s resignation, for leaking a letter that discredited then Defense Secretary Michael Heseltine.

Heseltine wanted to rescue the financially ailing Westland PLC helicopter company. Solicitor General Patrick Mayhew wrote a letter to Heseltine, claiming that some of Heseltine’s information was inaccurate. Thatcher’s office approved the move to leak parts of Mayhew’s letter to the press, though she was not personally aware of it, according to an Associated Press (AP) article from that time.

”For a government to leak [information] in order to discredit anyone is shameful,” opposition leader Neil Kinnock said at the time, according to AP. He said that causing damage to a member of government with such a leak “is an action of a government that is rotten … not just rotten to the core, but from the core.”

In February of 1986, Thatcher signed the Single European Act, one of the greatest shifts of power to an integrated European body. The Act created a single European market.

Thatcher later second guessed the decision, and was known throughout her career as standing against European integration.

In April of 1986, Thatcher supported the American bombing of Libya in retaliation for alleged Libyan targeting of U.S. bases in Europe. Muammar Gaddafi’s baby was killed in the bombing.

Her popularity had dipped below the 30 percent approval rating throughout early 1986, according to The Guardian, but it began to rise again later in the year and was back above 40 percent when she was reelected for her third term in 1987.

Upon reelection, Thatcher’s proposed reforms included a standardized curriculum in schools, changes to the socialized medical system, and a immensely unpopular “poll tax.”

The fixed rate local tax was labeled a “poll tax” by opponents, who saw it as disenfranchising people who did not pay it. The tax was a fixed rate per person that did not vary based on income, or other such factors.

She did not introduce the tax until April 1990. Protests erupted at that time and she met with dissent in her party.

The conflict between Thatcher and Chancellor Nigel Lawson that had been brewing for years came to a head. Thatcher had thwarted Lawson’s earlier attempts to enter the European exchange rate mechanism (ERM). Lawson had been shadowing the German Mark unbeknownst to Thatcher. Lawson continued to push for a single currency zone.

Thatcher would have fired Lawson at this point, if Lawson didn’t have the support of the majority of her cabinet, wrote John Turner in his book The Tories and Europe.

Gas and electricity were already privatized, but Thatcher also privatized water in 1988.

Thatcher’s approval rating steadily declined throughout 1989, and hit its lowest point of about 20 percent by April 1990 when her “poll tax” was introduced.

Riots against the tax were broadcast across the globe from White Hall and Trafalgar Square.

Heseltine launched a campaign to challenge her leadership, and she resigned.

Towards the end of her time in power, she supported then U.S. President George Bush Sr.’s move to evict Saddam Hussein from Kuwait. This played out after she had left office.

Thatcher was appointed to the House of Lords as Baroness Thatcher of Kesteven. Over the past decade she has also written books detailing her time as British prime minister.