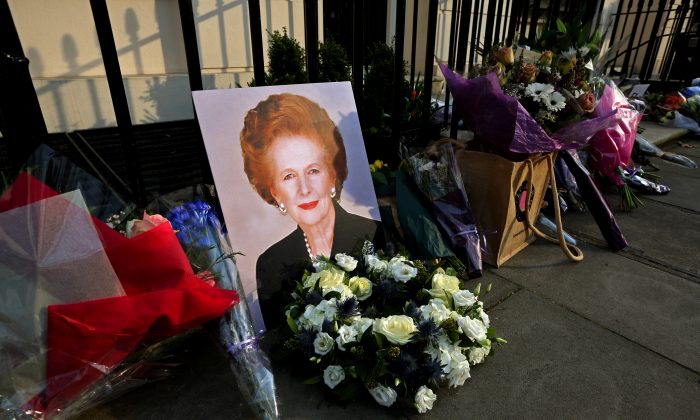 A portrait of former Prime Minister Margaret Thatcher is left next to floral tributes outside her residence in Chester Square in London, England, on April 8, 2013. (Peter Macdiarmid/Getty Images)
Europe

Margaret Thatcher: A Polarizing Figure in Life and Death

“Iron Lady” Margaret Thatcher made a lasting impression on Britain.

“Some parts of the country—especially those which relied on heavy industry—have never recovered economically. Nor it seems will they ever vote Conservative again,” writes Tim Bale, professor of Politics at the University of London, in a blog post on the London School of Economics and Political Science website.

When Thatcher died on April 8 at the age of 87, many across the United Kingdom celebrated—from Bristol and London, to Glasgow and elsewhere.

But, even many of her staunch detractors joined her staunch supporters in praising her strengths.

“Margaret Thatcher was my political opponent, but it would be disingenuous to ignore her achievements,” writes Lord Alton of Liverpool, former Liberal member of parliament, in a commentary for the Catholic Herald.

He praises, for example, her “brave decision to go to war when a military junta seized the Falkland Islands; and her intelligent and strong approach in dealing with the Soviet bloc.”

Thatcher’s approval ratings saw dips and rises over the course of her three terms as Britain’s first female prime minister (1979–1990). The undulations in public opinion have resonated through the decades following her time in office, through the days following her death, and into posterity.

In 1970, she became “Thatcher, milk snatcher,” for cutting back lunch programs in schools as secretary of state for education and science.

In 1982, Thatcher’s popularity dramatically increased when she quickly sent troops to regain the British territory of the Falkland Islands from Argentinian forces.

Professor Bale gives her much credit for her role in working with former U.S. President Ronald Reagan to essentially bankrupt the Soviet Union with the arms race.

“She also stood up to terrorists, helping to convince the IRA [Irish Republican Army] that there was no future in the armed struggle,” writes Bale. “Certainly, no one who remembers the courage with which she conducted herself during the Brighton bombing will ever forget it.”

When the IRA tried to bomb the Conservative Conference at Brighton in October 1984, Thatcher remained calm and continued with the conference.

“Here in Ireland, her espousal of old draconian militaristic policies prolonged the war and caused great suffering. She embraced censorship, collusion, and the killing of citizens by covert operations,” Adams said.

“Working class communities were devastated in Britain because of her policies. Her role in international affairs was equally belligerent, whether in support of the Chilean dictator Pinochet, [or] her opposition to sanctions against apartheid South Africa,” continues his lambasting.

By late 1986, her approval ratings had plummeted below 30 percent, according to British publication the Guardian. She had privatized state industries, battled trade unions—a massive miner’s strike began in March 1984—and the number of unemployed reached about 3 million.

She was determined to make changes to Britain’s ailing economy, says Bale, even “if that meant a return to levels of unemployment that hadn’t been seen since the 1930s and which many regarded as morally unacceptable and electoral suicide.”

Arthur Scargill led the miner’s union strike. His former wife, Anne Scargill, expressed the ire that remains against Thatcher in British industrial towns to this day.

“I know it was probably not good, but I was really, really happy [to hear Thatcher died,] because that woman caused us such distress and upset,” Scargill said in a taped interview with the Telegraph. “Here we were fighting for survival, not for a wage increase, and she just smashed our communities.”

Thatcher alienated large swaths of the population by “singling out certain enemies,” writes Dorian Lynskey, in his book “33 Revolutions Per Minute: A History of Protest Songs,” quoted by CNN.

“She was such an oppositional figure, singling out certain enemies, for example the Argentine junta, unions, travelers, people on benefits, the left wing in general,” writes Lynskey.

“She was unflinching and vicious in her attacks on them. There was a sense she was conducting a war on certain sections of society. She referred to the miners as ‘the enemy within.’ This just was not the way politicians talk about their citizens.”

Thatcher’s waning popularity in 1986 recovered, however, by election time in 1987. Her approval ratings rose more than 10 percentage points as an economic boom and a weak Labor opposition ushered in Thatcher’s third term—one that was doomed to end with another plummet in approval ratings and her resignation.

Her enactment of the fixed-rate local tax, dubbed the “poll tax,” was the nail in the coffin of her political career.

Riots were broadcast across the world from White Hall and Trafalgar Square.

Her government collected a fixed rate tax per person that did not vary based on income, or other such factors. Many opposed the bureaucratic costs of implementing the system. Many said it burdened the poor and benefited the rich.

Lord Alton writes: “My differences with her were over the failure to see the consequences of mass de-industrialization.

“A failure to cushion the blow and to provide transitional work led to social unrest and division. The poll tax was equally divisive and ill judged.”

He recounts an occasion on which he arranged a private meeting in London between the Iron Lady and Mother Teresa of Calcutta.

Alton comments: “Notwithstanding this, the two women clearly liked and understood one another very well.”

“She may have divided opinion during her time in politics but everyone will be united today [April 8] in acknowledging the strength of her personality and the radicalism of her politics.” -Nick Clegg, British deputy prime minister

“Margaret Thatcher was my political opponent, but it would be disingenuous to ignore her achievements. Unlike today’s posturing MPs, the Iron Lady was a conviction politician.” -Lord Alton of Liverpool