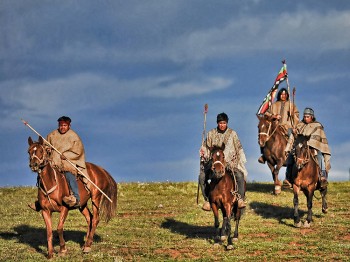 GUARDING ANCESTRAL LAND: Mapuche natives on horseback guard their land in the village of Temucuicui in Temuco, Chile, November 2009. The Mapuche are fighting for the rights to their ancestral lands, which they feel is their identity. (Martin BernettiAFP/Getty Images )
World

The Mapuche Nation: ‘Without land there is no culture’

By Elizabeth Roberts
biggersmaller
Print
For the Mapuche people, loss of land means loss of identity and without this life is meaningless.

Land is essential for the development of Mapuche culture; the land has the graves of their ancestors and is where their religious celebrations take effect.

"We are first ground and then people, so first ‘Mapu’ land and then ‘che’ people. For us, the earth is our mother,” Mapuche lonko (chief) Juana Calfunao, explained to members of the European Parliament in Brussels last March.

The story of Juana’s town, as with so many indigenous towns in Latin America, is one of a history of territorial dispossession, genocide, and cultural devastation, which continues to ruin the lives of the natives.

The Juan Paillalef community has been the victim of systematic persecution by the Chilean government. Lonka Calfunao told the Parliament how Chilean authorities and industry executives have tried to take her land away.

"The Chilean State and the forestry companies … have burned my house four times now. … We have no home to live in,” she said. “After they burned my house, the forest companies wanted to take my land illegally and the army came with tanks and 300 police. My son and I on foot defended the community against attack helicopters."

The Mapuche are native to the southern cone of South America where they were recognized as an autonomous nation by Spain in 1641 after successfully defeating the Spanish conquests on their land. In the late 1800s however, the Mapuche were victims of extermination campaigns carried out by Argentine and Chilean armies against native peoples living in the Patagonia region.

In these military campaigns, native leaders and soldiers were killed, and communities were enslaved with girls and women forced into servitude and prostitution.

The nation states took the Mapuche land, enfolding it into their developing economic structures.

Although on paper Chile has seemed ready to protect the rights of indigenous by signing the International Covenant on Civil and Political Rights, the International Covenant on Economic, Social, and Cultural Rights, the OAS Charter, the American Convention on Human Rights Charter, and the American Declaration of the Rights and Duties of Man, there is still a wide disparity in practice between these rights and the protections the Mapuche actually receive.

In a 2003 report on the Mapuche, the International Federation on Human Rights said, “There is a considerable gap between the legal protection of indigenous rights during this first democratic period in Chile and the actual development of public policies regarding indigenous issues by the Chilean government.”

The Mapuch people, numbering approximately one million, are still subject to ethnic discrimination.

Besides institutional discrimination, the recent efforts by the Mapuche to recover their native land has brought them into conflict with transnational companies that want access to the land’s natural resources.

Mapuche scholar and director of History at Sorbonne University in Paris, Arauco Chihualaf, told the European Parliament that natural resources are the primary source of conflict between the Mapuche and multinational corporations. “The advance of the globalized economy governed by transnational companies that exploit basic resources, such as mining, agricultural and water, generates conflicts because many of these riches are found in indigenous land,” he said.