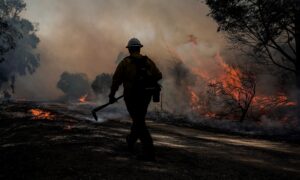 It Would Be 'Proper and Very Nice' to Know on Nov. 3 Who Wins the Election: Trump
0

By Gary Feuerberg
Print
WASHINGTON, D.C.—Over 50 million children under the age of 18 participated in some organized sports programs each year. If a child playing in a sport is lucky, his or her coach has had some quality coaching education prior to assuming coaching responsibilities.

Information on the qualifications of the million or so coaches in the country is lacking, but thanks to the 2008 National Coaching Report, we know something about the tremendous diversity of coaching requirements and standards across the nation.

The 160-page National Coaching Report was released August 6—two days before the beginning of the Beijing Olympics—at a news conference at the National Press Club. The National Association for Sport and Physical Education (NASPE) published the annual report and sponsored the news conference.

At the news conference, Jon Butler could speak from his experiences at Pop Warner Little Scholars. Butler spent six years as a high school assistant football coach and one year coaching Catholic Youth Organization. He said that the old days of someone, with some athletic experience in their youth, coaching youth was now obviously out-of-date.

He gave the example of coaching 8 or 9 year-olds the “Liberty” position in cheerleading, where the youngster is held up by her teammates. He noted that cheerleading has become “tremendously more gymnastic and athletic.” To coach the children for this example requires that the coach know something about the fundamentals of coaching.

Coaches have enormous influence on performance, likelihood of injury, and whether the child finds the sports experience positive or negative.

When a child’s first sports experience is negative, the odds are high that he or she won’t want to continue in sports activities. And the coach has a lot to do with determining whether that first experience was a positive one, according to the news conference speakers, who often spoke of preparing coaches to provide their charges “a quality sport experience.”

“I know that many Olympic positive athletic experiences were a result of the influence and impact of their coaches,” said Professor Cleland.

Currently, no federal law mandates that sports programs require coaching education or certification, according to the report. However, many individual coaches acquire professional development on a voluntary basis.

The National Federation of State High Scholl Associations (NFHS) says that only a few coaches received formal coaching education out of an estimated one million adult coaches in the United States. NFHS partnered with NAPSE to produce the 2008 National Coaching Report.

Thus, “while a surprising high number of states require coaching education, only a few states do so without allowing “adjustments” [e.g., waivers, exemptions, substitutions] to the requirement,” says the report.

The report recommends that all coaches be required “to complete a quality coaching education program,” and that it be completed prior to working with athletes. Furthermore, while acknowledging that a teaching credential is helpful in coaching, it “should not replace appropriate coach education.”

With such a small sample size out of 59 known organizations providing sport opportunities for youth outside of educational structures, it is not easy to summarize youth sports with aggregate statistics in a meaningful and reliable way. The authors wisely decided to minimize their overall conclusions of these highly diverse organizations, and instead provided individual profiles for the 15 participant youth sport organizations.

All 15 programs stated that coach education/training is required. This acts as an incentive for those who want to coach. The programs, however, rely primarily on voluntary compliance. Only one of the 15 programs mentioned possible punitive actions (e.g., local program fines) for failure to use certified coaches, says the report.