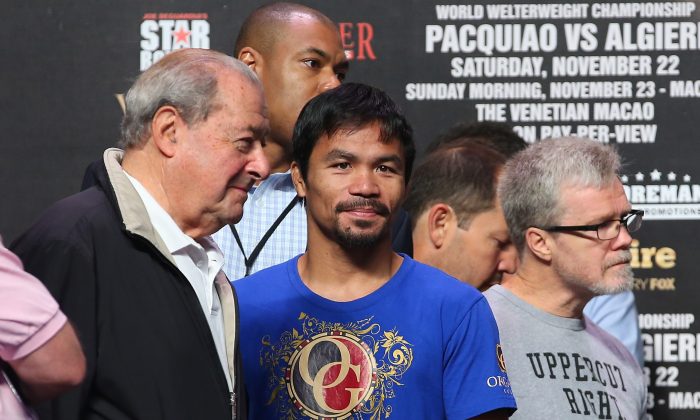 Top Rank Founder and CEO Bob Arum, Manny Pacquiao and trainer Freddie Roach talk during the official weigh in at The Venetian on November 22, 2014 in Macau. Pacquiao will defend his WBO world welterweight title against Chris Algieri in Macau. (Photo by Chris Hyde/Getty Images)
Sports

Arum says that Pacman is ready for the bout but Floyd is not.

“It’s hard for me to be so pessimistic because there’s such optimism from our side, on the Pacquiao side,” Arum told reporters this week, reported the Desert Sun.

“But as the silence becomes defining from the Mayweather side, I become less and less optimistic. I don’t know what it’ll take to get Mayweather in the ring with Pacquiao.”

Pacquiao’s reemergence as one of the top fighters, complete with his domination of Chris Algieri in late November, was supposed to set up the long awaited megafight against Mayweather, but the latter has reportedly been wary of committing himself to fight what would potentially be one of his toughest foes.

Arum recently said that Mayweather is scared that Pacquiao has a great shot at winning, and is worried at what a loss would do to his reputation.

Other fighters have been weighing in recently, with Timothy Bradley saying Pacquiao would win but Amir Khan saying Mayweather would triumph, among other opinions.

For his part, Arum sounded weary of the prolonged negotiations for what would likely be the highest grossing fight ever.

“That is a question to ask Mayweather,” Arum said when asked if the fight would ever happen.

“If you came to me and said, ‘Hey Mayweather is ready to fight him,’ OK, then I’d say the fight is on. I mean, there’s never been a question weather Pacquiao wants to fight him.”

Meanwhile, the Wall Street Journal noted that Pacquiao imposes a heavy toll on those who do fight him, with many foes losing a lot more afterward.

“In Pacquiao’s past dozen fights against foes that have held at least one world title belt before entering the ring, opponents came into the bout with a combined record of 532-35-4 (.935 win percentage). Afterward, their collective record was 49-26 (.628),” it reported.

Exceptions exist, such as Juan Manuel Marquez and Miguel Cotto, but the slew of boxers who weren’t the same after facing Pacquiao include Oscar de la Hoya–who retired after fighting Pacman–Ricky Hatton, and Emmanuel Lucero.