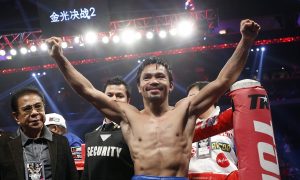 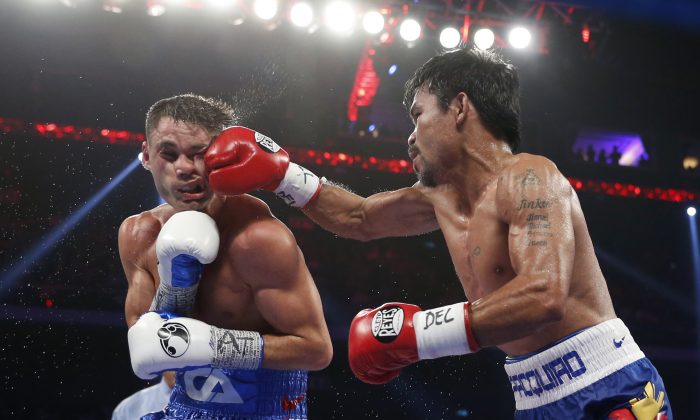 Manny Pacquiao trainer Freddie Roach says that Pacman will knock Floyd Mayweather out if the pair actually end up fighting.

“Manny showed against Algieri that his legs are great and he was on his toes for twelve straight rounds. I don’t think Mayweather can do that anymore. I think he’s getting old and his legs are gone,” Roach said during a recent radio interview with Leave It In the Ring.

“I think it’s only a matter of time before we knock him out.”

Roach said that one key difference between Pacman and Money is that Pacquiao is willing to take risks in the ring while Mayweather is not.

“Manny’s skills are really good. The thing is Manny will go for it. He’ll actually go for the knock-out. And sometimes when you go for it, you put yourself in harm’s way to be hit. Like when he walked into a shot against Marquez,” he said.

“Mayweather just carefully picks his opponents. I mean, why did they [Mayweather and Marcos Maidana] fight a rematch in that last fight? The first one put me to sleep, and the second fight put me to sleep even faster,” he said.

“I think Mayweather has hand picked every single one of his opponents, and he picks the right styles. We know he doesn’t fight southpaws very well, that’s one of the reasons why I think he’s ducking us. He knows a southpaw with power is dangerous.”

On the other hand, former boxer Paulie Malignaggi says Mayweather is the clear favorite if the bout takes place.

“A lot of people are going to think that I hate Manny because I’m saying this, but no…just watch the two guys fight. If you can’t see that happening after watching both guys fight, then I don’t know what to tell you.

“Stylistically, Manny shows a lot of unnecessary movement around the ring. That would come back to hurt him against a guy like Floyd, who doesn’t have much wasted movement in the ring. When you give ground to Floyd Mayweather, he’ll walk you down.

“People think Floyd’s a runner, but he’s not. Anytime you see a fighter give Floyd ground in the ring, you see Floyd walk them down and cut off the ring. He’ll teach Manny how to proficiently cut off the ring.”