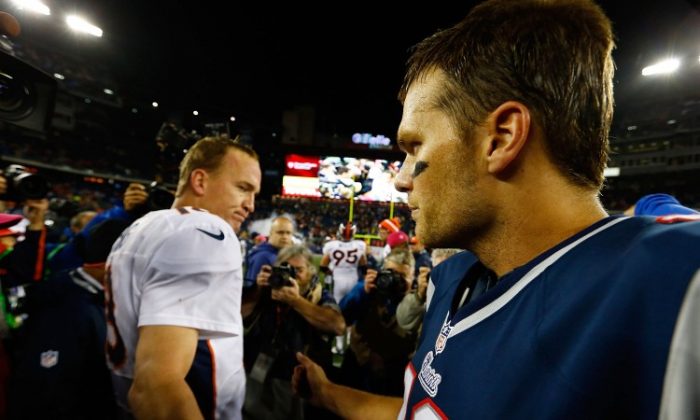 Manning and Brady on Collision Course in AFC

Over the final few weeks of the regular season, the AFC seemed to be preparing for another rematch between Peyton Manning and Tom Brady.

The two future Hall-of-Fame quarterbacks have helped separate their teams from the rest of the AFC, and it does seem likely for New England to travel to Denver for the AFC championship game.

Both New England and Denver recorded routine regular season wins over their respective divisional-round opponents this weekend: Houston and Baltimore.

Houston muddled their way past an offensively inept Cincinnati and, on paper, wouldn’t be expected to trouble the Patriots after being annihilated 42–14 about a month ago.

But perhaps they can take a page out of San Francisco’s book. One week after the Pats crushed the Texans, the 49ers went into Foxborough, took a 28–3 lead, and hung on for the victory.

Yes, New England did, very uncharacteristically, turn the ball over four times in that game, but also, Brady was under constant attack and was sacked three times.

In Houston’s loss to the Pats, they didn’t trouble Brady, who was only sacked once. As well, New England only turned the ball over once in that game.

And just like San Francisco QB Colin Kaepernick had a strong performance against New England (4 TDs, 107.7 QB rating), Matt Schaub needs to rediscover his early season form—form that carried him to a Pro Bowl nomination.

Expect Houston to make a few more plays than they did a month ago, but a very well-prepared and well-rested New England team will be hard to knock off.

Denver finished the regular season on an 11-game winning streak that began on Monday night of Week 6 with an unbelievable come-from-behind 35–24 win over San Diego. The Broncos won each of those 11 straight games by at least seven points.

Baltimore’s defence has their work cut out for them, but at least they have a healthy Ray Lewis to lead the way. The 17-year veteran led his team in tackles with 13 last Sunday against Indianapolis and didn’t miss a beat.

But his task is much more difficult on the road with Manning at the helm of the offence.

Baltimore will face a stiffer challenge against the Denver defence as well, but, against the Colts, they really cast aside the offensive woes that had a hand in them losing four of their last five games to finish the regular season. Joe Flacco was efficient and error-free while Ray Rice and Bernard Pierce ran for a combined 203 yards.

It will be a stern test for the Ravens to knock off the Broncos no matter how one looks at it. Peyton Manning is as good as he’s been since he threw 49 TD passes in 2004–2005.

The NFC picture is, by contrast, much harder to feel convinced about. The top two teams, Atlanta and San Francisco, showed that they can beat anybody in the league, but they also finished the season winning only three out of their last five games.

But a slightly less-than-convincing end to the regular season for Atlanta and San Francisco is not what clouds the picture—it’s that Seattle and Green Bay have good reason to be confident with deserved wild-card weekend victories.

NFL wild-card weekend didn’t live up to the hype, but the divisional round sees the top two teams in each conference join the fray and should result in more exciting games and storylines.