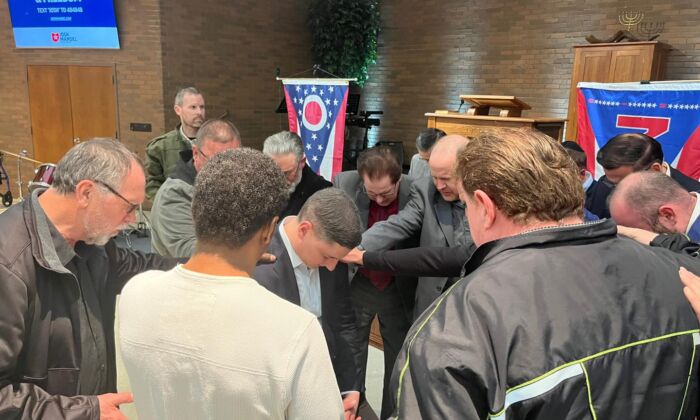 This is what a new Trafalgar Group poll indicated when it was released on April 15.

The poll also showed that 54.9 percent of respondents, who are likely GOP primary voters, are either “more likely” or “much more likely” to vote for a candidate endorsed by former president Donald Trump.

“It seems to have moved to a two-person race between Mandel and Vance. Based on our Trump endorsement question, it’s clear if that were given to either of the top two they would very likely be headed to a plurality victory,” the Trafalgar Group’s chief pollster Robert Cahaly said.

Speculation that Trump will endorse Vance heightened last month when Donald Trump Jr. tweeted that “JD is 100 percent America First” last month and attended a fundraiser for the candidate in Palm Beach, Florida, earlier this month.

On April 14, NBC News reported that Trump plans to endorse Vance in the primary, citing three unnamed sources “with knowledge of his decision.”

Republican pollster David Lee conducted a survey for Protect Ohio Values, a pro-Vance super PAC, that was released on April 6 and showed Vance, Gibbons, and Mandel in a tie for the lead at 18 percent each.

Upon learning about those results, campaign operatives for Gibbons and Mandel agreed to release parts of their internal polling data to refute the Protect Ohio Values survey, according to the Washington Examiner.

Information from Gibbons’ campaign claims that Vance’s image is 36 percent favorable/33 percent unfavorable and trending in a negative direction.

“While his name identification has improved some since February (+12 percent), his favorables have remained the same since September, and his unfavorables have increased 20 percent,” Mandel pollster Chris Wilson explained.

“Essentially, as Republican primary voters get to know more about J.D. Vance, the less they like him.”

On the same day the Protect Ohio Values poll was released, Timken’s campaign revealed an internal poll indicating that Gibbons was in first with 20 percent followed by Mandel (16 percent), Timken (15 percent), Dolan (13 percent), and Vance (10 percent).

Reportedly, Trump’s team wrote a draft announcing the Vance endorsement, but a source from Mandel’s campaign pointed out that polling data and a memo from Remington Research Group on April 14 placed Mandel in first with 23 percent followed by Gibbons in second at 17 percent and Vance in fifth at 10 percent.

The Remington Research survey also showed that Mandel would win with 33 percent behind a Trump endorsement and 19 percent if the former president backs Vance, while Vance would finish fourth at 15 percent with a Trump stamp of approval.

“We have every confidence in our numbers,” Thompson said. “Unlike other efforts, we are focused on winning the race in Ohio, not playing games in the media.”

Several polls in previous months showed Gibbons and Mandel neck-and-neck atop the Ohio GOP Senate field. On March 18, the rivals engaged in a nose-to-nose argument on stage at a debate. The incident seemed to have a negative impact on both candidates among audience members.

After the forum ended, debate host FreedomWorks conducted a straw poll of the 400 people in attendance that showed Mandel in last place with 4.6 percent and Gibbons in third at 16.1 percent. Vance was the winner with 43.1 percent.

Gibbons and Mandel have taken heat from their on-stage altercation. Gibbons has received heavy criticism for saying that “The middle class is not paying their fair share. The problem is, you need the middle class to win an election.”

Vance has gained momentum in recent weeks, including an endorsement from Ohio Right to Life.

After learning that Trump could endorse Vance, the Ohio GOP Central Committee and around three dozen Republican Party county chairs across the state authored a letter on April 14 encouraging Trump to avoid backing a candidate in the Senate primary.

The campaigns of Mandel, Gibbons, and Timken played a role in the letter, Fox News reported. The letter was apparently obtained from a representative of one of the GOP Senate campaigns.

In response to the letter to Trump, a source connected to the Vance campaign said, “Failing campaigns sometimes band together. It is surprising that they don’t know that Donald Trump actually knows what Vance said about Trump in the past.”