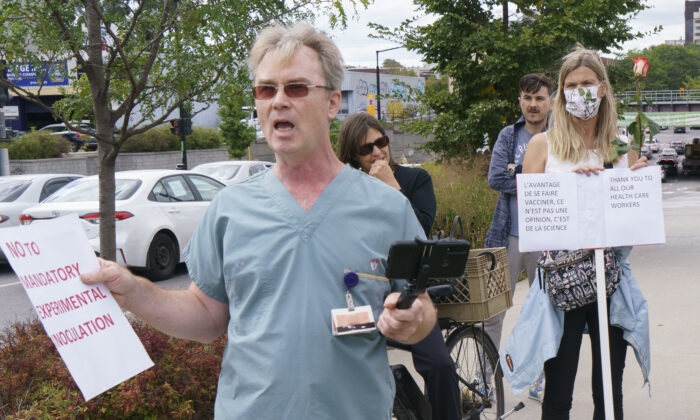 A health-care worker demonstrates against mandatory vaccination mandates as a vaccine supporter looks on in front of a hospital in Montreal, on Sept. 13, 2021. (THE CANADIAN PRESS/Paul Chiasson)
Canada

When Quebec Health Minister Christian Dube announced a one-month extension to the Oct. 15 deadline imposed on the province’s health-care workers to be fully vaccinated against COVID-19, he cited the risk of an urgent staffing shortage if the ministry maintained its original mandate. With several other provinces having set deadlines of their own, Canadians are watching to see whether similar extensions will be added.

British Columbia has mandated its health-care workers to be fully vaccinated by Oct. 26. In Alberta, Oct. 31. New Brunswick has set Nov. 19, the Yukon and Nova Scotia Nov. 30, and Newfoundland and Labrador Dec. 17. Saskatchewan and Manitoba have also created mandates, but have added testing options for staff unwilling to be vaccinated.

Ontario has also allowed unvaccinated workers to submit to regular COVID testing, although some hospitals have had the authority to craft vaccination policies without provincial endorsement, and several employees have been let go. The Northwest Territories has hinted that it will also bring in its own version of a vaccine mandate.

These policies have met with opposition from health-care professionals across multiple disciplines. Some 1,000 Quebec front-line workers and first responders held a silent rally in Quebec City on Oct. 15 to protest the province’s vaccine mandates.

In Alberta, over 3,500 health workers including some 70 doctors called for an end to that province’s vaccine mandate in a letter to Alberta Health Services (AHS) on Sept. 20, questioning the efficacy of the COVID-19 vaccines over time and the risks of side effects.

However, several professional associations in the health-care community have expressed support for vaccine mandates for health workers.

CMA president Dr. Ann Collins emphasized her view that vaccine mandates are part of an essential strategy to combat the virus. “There is significant evidence that vaccines are safe and effective,” she said. “And as health professionals who are leading the vaccination campaigns, it [mandatory vaccination of health-care workers] is the right call and an appropriate step.”

In an open letter to Ontario Premier Doug Ford, the Registered Nurses’ Association of Ontario (RNAO) echoed Collins’s sentiments and said it doesn’t support those who oppose the mandate. “Premier, we at RNAO know that mandatory vaccination will encourage the vast majority of health-care workers to take the vaccine,” the letter read. “But it will also raise resistance from a small number of opposers. Know that we will support you in addressing opposers.”

However, letters filed to several health-sector unions in British Columbia on behalf of the Canadian Voters Association disagree. The letters contend that each union has an obligation to represent all members who contest the mandates. They also provide examples where union members claim the government breached their collective bargaining agreements or changed understandings and definitions to justify a vaccination policy.

Marty Moore, a lawyer with the Justice Centre for Constitutional Freedoms, cited violations of the Canadian Charter of Rights and Freedoms.

“The Justice Centre views government requirements that employees receive COVID shots to be violations of employees’ constitutional rights, particularly their rights to life, liberty, and security of the person,” he said. “It is clearly a violation of individual and bodily autonomy to dictate that an individual be injected with a replicating mRNA substance or lose their livelihood.”

The BC Nurses’ Union issued a statement on Sept. 15 supporting vaccinations while expressing concern about a potentially looming problem because of the mandates.

“In response to the government’s announcement on September 13 of its plans to extend the mandatory vaccination order to all health-care workers,” it read, “BCNU expressed its support for vaccination while raising concerns that consequences to this order could contribute to the severe nurse shortage in this province.”

With over 93,000 confirmed vaccinations among health-care workers reported, AHS is confident the province won’t experience a staffing shortage beginning Nov. 1, suggesting that its employees back the vaccine policy and will largely comply.

“AHS expects most of its workers to be fully immunized,” AHS said. “The vast majority of our health-care workers understand the importance of immunization, to protect themselves, and to protect their patients.”

The ministry also said it will accommodate workers who are unable to obtain vaccines because of a medical reason or human rights issue, noting that it will continue to work with those who remain hesitant.

“The worker will also be provided with educational resources regarding COVID-19 vaccines; if the worker remains not fully immunized, they will be placed on an unpaid Leave of Absence; workers who become fully immunized after Oct. 31, 2021, will be able to return to work once they have provided proof that they are fully immunized in accordance with the policy.”

The Epoch Times reached out multiple times to the health ministries in Quebec, New Brunswick, Nova Scotia, and B.C. without response.