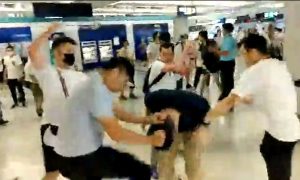 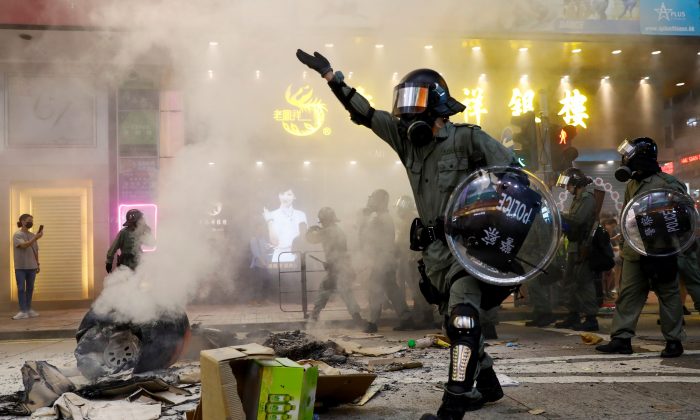 Riot police walk next to a street barricade during a demonstration in Mong Kok district in Hong Kong, China on Sept. 6, 2019. (Kai Pfaffenbach/Reuters)
Hong Kong

In dealing with the summer-long protests, the Hong Kong police handle things differently than they did five years ago during the Umbrella Movement. According to various media reports, police have fired more than 2,000 rounds of tear gas, large quantities of bean bags and rubber bullets, and even sprayed water cannons at the protesters in the past three months.

People suspect that mainland Chinese police are present in the Hong Kong police force. A video taken by a witness on Sept. 8 shows several policemen speaking mandarin to each other, supporting this assertion.

Mandarin is the main dialect in China, spoken by 70 percent of all Chinese speakers over a large geographical area, while native speakers of Cantonese are found in China’s Guangdong Province, Hong Kong, and Macau. Because of the noticeable differences between the dialects, it is very difficult for a native Hongkonger to speak mandarin as fluently and accurately as a native speaker—one would inevitably speak with a Cantonese accent.

This explains why a police officer speaking in mandarin is almost certainly from mainland China.

The video footage, widely circulated online, showed several Hong Kong riot police firing tear gas randomly at the exit of the Causeway Bay Station on the evening of Sept. 8, although no protesters were gathered at the station.

One of the officers threw a tear gas canister onto the sidewalk without issuing any warning. He did it casually, when still inside the building, and before he could see if it would hit anyone. As a matter of fact, it almost hit a reporter who was standing on the sidewalk filming the action.

Just as the smoking tear gas permeated the air, the police blocked the subway exit with shields. Then, a policeman was heard yelling in Mandarin: “(Go to) the left, the left.”

In another video taken by an Epoch Times reporter around the same time, a riot police officer said to his colleagues, “All our comrades are here. We can leave now.”

The term comrade is commonly used in China when referring to colleagues. Occasionally, Hongkongers may use it in a cynical or joking context, making fun of the word as a communist etiquette. But in the video, the officer spoke the word naturally, an unmistakable sign that it is a word he regularly uses.