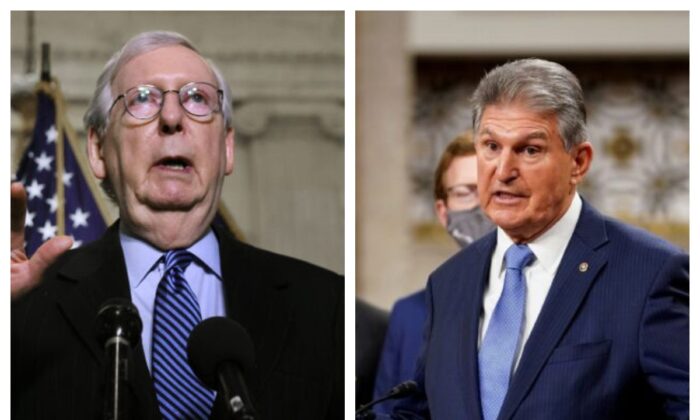 Manchin Should ‘Come Across Aisle and Join Us’: McConnell

In an open gesture to embattled moderate Sen. Joe Manchin (D-W. Va.), Senate Minority Leader Mitch McConnell (R-Ky.) told Fox News on Wednesday that Manchin should join the GOP amid continuing attacks on the West Virginian from his own party.

Manchin kicked off a panic among Democrats on Dec. 19 when he announced in a Fox News Sunday interview that he would not be giving his crucial support to President Joe Biden’s Build Back Better (BBB) agenda in the Senate, becoming the 51st senator to openly oppose the bill.

“This is a mammoth piece of legislation and I had my reservations from the beginning,” Manchin told host Brett Bauer.

Despite working with President Joe Biden, Senate Majority Leader Chuck Schumer (D-N.Y.), and Speaker of the House Nancy Pelosi (D-Calif.) “every minute of every day” to make the bill agreeable, Manchin said he simply could not give the almost $2 trillion bill his support.

The announcement sent proponents of the bill into a fit, with several social progressives questioning Manchin’s character and motives.

The progressives suggested that Manchin, who has been in intense negotiations with Biden for months on end, opposed the bill not out of ideological conviction but because he was merely serving special interests and donors.

Others questioned Manchin’s character and sense of honor.

Even the White House suggested that Manchin was a liar, despite Manchin never having affirmatively committed to voting for the massive spending bill.

Amid this vitriolic treatment, people are again wondering if Manchin may switch parties. And Republicans have already started making advances to see whether Manchin could be persuaded to switch.

Sen. John Cornyn (R-Texas) became one of the first to raise the olive branch to Manchin. Speaking to an Austin-based radio station Tuesday, Cornyn said that he had texted Manchin about joining the GOP.

“Joe, if they don’t want you, we do,” Cornyn quoted of his one-line text to Manchin. Cornyn admitted during the interview that he hadn’t heard back from the moderate swing-voter.

“A good solution to [Manchin’s] problem would be to come across the aisle and join us, where he’d be treated with respect,” McConnell told Fox News.

McConnell noted that such a switch on Manchin’s part would be beneficial for him politically. “He is in a very red state, a very Republican state,” McConnell said. “He’s trying to exist in today’s Democratic Party, which is very hard. The Democratic Party today is the party of Bernie Sanders. They want to turn America into a socialist country.”

“No wonder Joe Manchin is uncomfortable on the Democratic side of the aisle,” McConnell continued. “I think he’s, for example, the last pro-life Democrat in the Senate, the last one.”

“He’d be a lot more comfortable on our side,” McConnell ruled.

Still, McConnell also admitted that he considers this outcome unlikely.

“He’s been a lifelong Democrat,” McConnell noted. “I don’t expect this to happen.”

Efforts to bring the maverick West Virginian to the Republican side of the aisle are nothing new for Manchin or the GOP.

The same rumor has already popped up several times during the 117th Congress alone. Speculation in June 2021 that Manchin may switch parties became so pronounced that it prompted a response from McConnell.

In October, rumors and speculation about an imminent party switch from Manchin had grown, with reports at the time claiming that an anonymous insider had good information that Manchin was considering a party switch.

Again, these rumors saw a GOP invitation to Manchin, this time from Sen. Mike Lee (R-Utah). During a Fox News interview, Lee was asked whether Manchin should switch parties.

“Absolutely,” Lee quickly responded. “[He] should leave the Democratic Party and I look forward to embracing him when he joins our caucus.”

But Manchin vehemently denied the rumors at the time, telling a reporter that they were false.

Ultimately, a party-switch by Manchin would be a spectacle of huge proportions in Washington, as it would force Majority Leader Chuck Schumer (D-N.Y.) to hand over the metaphorical gavel to Minority Leader Mitch McConnell nearly a year before the 2022 election takes place.

But it would change the situation on the ground only nominally: Manchin has said time and time again that he isn’t a party-line voter. Whether he has a “D” or an “R” beside his name, Manchin says his vote will be the same.