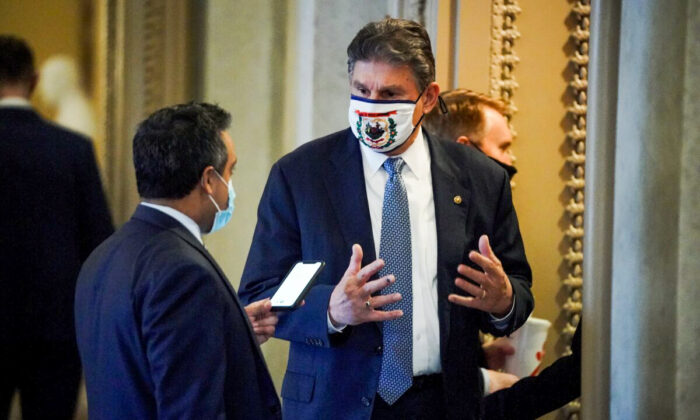 Sen. Joe Manchin (D-W.Va.) speaks to a reporter outside the Senate Chamber in Washington on Feb. 13, 2021. (Greg Nash/Pool/AFP via Getty Images)
Congress

Sen. Joe Manchin (D-W. Va.) on Monday went against party leadership and suggested that Democrats should use the reconciliation process to raise the debt limit as Republicans double down on their commitment to vote against any increase to government spending.

Republicans, upset with Democrats’ partisan bills, have demanded that Democrats use the partisan reconciliation process to raise the debt ceiling as well. Senate Minority Leader Mitch McConnell explained this position in a Monday letter to President Joe Biden, writing “since your party wishes to govern alone, it must handle the debt limit alone as well.”

Republicans have since re-upped this challenge, saying that they will filibuster any non-reconciliation bill that raises the debt ceiling.

This route has long been rejected by Democratic leadership in both chambers of Congress. In early September, Speaker of the House Nancy Pelosi (D-Calif.) rejected calls to include a debt limit increase in the Democrats’ partisan $3.5 trillion budget reconciliation bill.

The route is not the Democratic leadership’s preference, with some polls showing that such debt limit increases are unpopular with the American people (pdf).

But if the debt limit is not raised, the country will quickly face its first default in history due to expanding government expenditure, which Treasury Secretary Janet Yellen has warned would be “catastrophic.”

Biden said in a White House live stream, “Defaulting on the debt would lead to a self-inflicted wound that takes our economy over a cliff.”

On Sept. 27, Republicans stood by their threats, voting unanimously against opening debate on a continuing resolution that included a raise to the debt ceiling.

After that vote, leaders rushed to craft legislation to avoid a government shutdown, but continued rejecting use of the reconciliation process to be able to raise the debt ceiling with no Republican votes.

At a press conference the day after the vote, Senate Majority Leader Chuck Schumer (D-N.Y.) said, “Going through reconciliation is risky to the country and is a non-starter,” adding that using reconciliation to raise the debt ceiling is “very, very risky.”

“We’re not pursuing that,” he declared.

In a speech on the debt limits facing his government, Biden echoed this sentiment, saying that the reconciliation path is “fraught with all kinds of potential danger of miscalculation.”

But on Monday, Manchin broke with party leaders, emphasizing the importance of raising the debt ceiling by any means necessary.

The West Virginia Democrat told reporters “We shouldn’t rule out anything [including reconciliation]. We just can’t let the debt ceiling lapse, we just can’t.”

Manchin, who has long promised that he supports the filibuster and will vote to defend it, was asked by reporters whether he would consider getting rid of the rule to allow Democrats to push through a debt ceiling increase.

“The filibuster has nothing to do with the debt ceiling,” Manchin snapped back. “We have other tools that we can use,” he explained, ruling, “If we have to use them, we should use them.”

During times of unified party governments, the minority party has often used the debt ceiling to play political hardball. During the second term of President George W. Bush, then-Senator Biden joined his party in voting unanimously against raising the debt ceiling, forcing Republicans to raise the limit on their own. Schumer also voted against raising the debt limit at the time.

Despite Blaming Republicans, Schumer Indicates Reconciliation May Be Used

Schumer blamed the crisis on “Republican stupidity,” saying that the minority party had become “the party of default.” Schumer and others have continued to insist that any default will be entirely of Republicans’ making.

Biden also blamed Republicans, saying they are “obstructing” a vote with the use of the filibuster and “playing Russian Roulette with the U.S. economy.” He didn’t address Republican criticism that his $3.5 trillion budget bill has been partisan in nature, with little room for negotiation to win Republican support.

But after Manchin’s brief statement to reporters emphasizing the importance of raising the debt ceiling by any means necessary, party leaders have also shown signs they may be rallying behind this view despite their long opposition to using reconciliation.

In a Monday letter to Senate Democrats, Schumer wrote, “Let me be clear about the task ahead of us: we must get a bill to the President’s desk dealing with the debt limit by the end of the week. Period.” Despite his previous opposition to using reconciliation, Schumer here indicates that leadership may be open to the option.

The clock is ticking for action by Congress, as the United States will default on its existing debts by Oct. 18 if action is not taken. Under the terms of the Republican threat, which the party has shown to be willing to act on, Democratic leaders have little choice but to use reconciliation or face default.

Nick Ciolono contributed to this report.