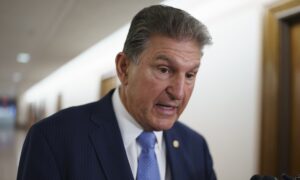 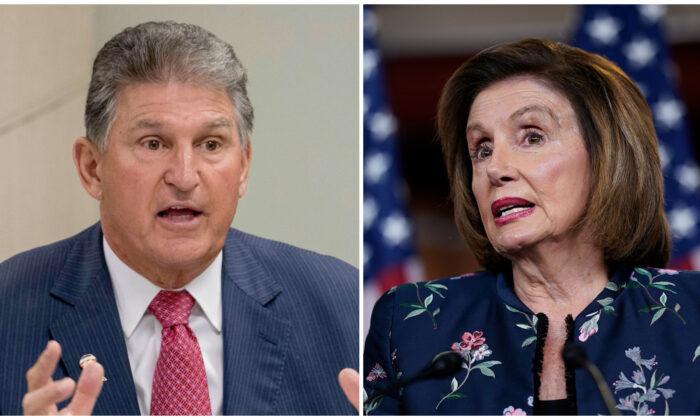 Manchin, Pelosi Clash on Plan for Legislation After House Recess

For the past two weeks, Speaker of the House Nancy Pelosi (D-Calif.) has been negotiating between moderates and progressives in her caucus who threaten to derail the House agenda on its return from recess.

Pelosi’s plan has long been to force a joint vote on both the Infrastructure Investment and Jobs Act, passed in a bipartisan Senate vote before the recess, and Sen. Bernie Sanders’s (I-Vt.) $3.5 trillion budget resolution, advanced by a party-line vote.

In an Aug. 11 press release, the Congressional Progressive Caucus showed their approval for this move, saying that they wouldn’t consider the infrastructure bill before passing the budget resolution. At 95 votes, this cooperation of the caucus is necessary to Pelosi’s plans.

But in a letter released the next day, nine House moderates took the opposite position, saying they wouldn’t consider the budget resolution before the passage of the infrastructure bill. While this group—all members of the House “Problem Solvers” Caucus—has a smaller membership than the progressive caucus, it controls enough votes to kill Pelosi’s plans.

In an Aug. 21 press release directed toward the nine Congress members, Pelosi said House Democrats “have an historic opportunity to build a stronger, fairer future for the children.”

“With regard to the $3.5 trillion topline number for this package,” a concern among moderates, “the President has been clear: this is the number that will honor his vision to Build Back Better.”

Pelosi concluded the release with a plea to the members of her caucus: “Any delay to passing the budget resolution threatens the timetable for delivering the historic progress and the transformative vision that Democrats share. In support of President Biden’s vision … we must move quickly to pass the budget resolution this week. It is essential that our Caucus proceeds unified in our determination to deliver once-in-a-century progress for the children.”

This release followed news on Aug. 19 that two Senate moderates—Sens. Joe Manchin (D-W. Va.) and Kyrsten Sinema (D-Ariz.)—were advising the nine in negotiations with the White House and the speaker. The two senators hadn’t publicly commented on their involvement since Aug. 19.

On Aug. 23, Manchin broke his silence on the stalemate.

In a statement posted on Twitter, Manchin had this to say about Pelosi’s plans to force a vote on both bills: “Just like Democrats and Republicans came together in the Senate to pass the historic bipartisan infrastructure package before considering the Democratic budget resolution, the House should put aside politics and do the same. With so much uncertainty in the world today one thing is certain, we must unite and pass a critical priority of the American people—improving our nation’s infrastructure. This is not about party or politics, it’s about doing what is right for the country. It would send a terrible message to the American people if this bipartisan bill is held hostage. I urge my colleagues in the House to move swiftly to get this once in a generation legislation to the President’s desk for his signature.”

Even as the House returns today to take up these proposals, Pelosi faces a difficult situation. Neither House progressives nor House moderates have relented in their commitment to their respective aims.

If Pelosi tries to appease the moderates and pass the infrastructure bill first, as Manchin insists, she will lose the 95 votes of the progressive caucus and the bill will likely fail. But if she tries to appease progressives and pass the two together, she will lose the nine moderates. Though smaller, these nine votes are enough to kill both bills; with her deeply divided 220-vote coalition against Republicans’ unified 212 vote caucus, Pelosi can spare only three of her coalition joining with Republicans to avoid a tie or an outright rejection.

Manchin’s statement increases the pressure on Pelosi, who must find a way through the stalemate if she hopes to pass both bills. Despite this, Pelosi remains hopeful that she will have both bills passed by Oct. 1.