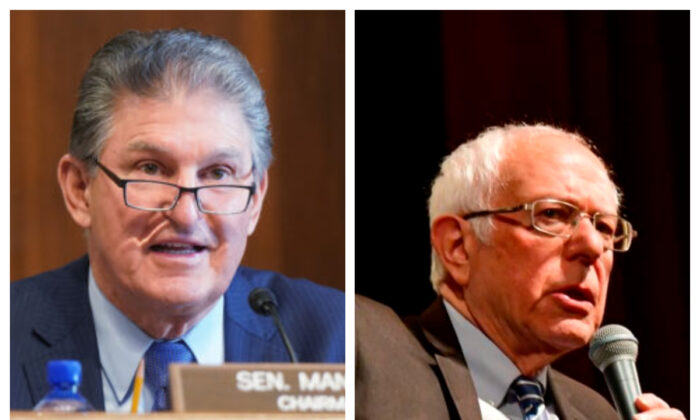 Democrats in Congress have long emphasized their $3.5 trillion budget bill’s climate policies as constituting a crucial element of the bill, although moderate Sen. Joe Manchin (D-W.Va.) remains unconvinced, even as colleagues in his party speed toward another legislative deadline at the end of October.

For most Democrats in Congress, policies to reduce carbon emissions and to move away from fossil fuels have been a keystone of their policy priorities for months.

When Sen. Bernie Sanders (I-Vt.), who drafted the original budget framework, introduced the bill on the Senate floor, he promised an “extremely aggressive … [transformation of the U.S.] energy system away from fossil fuels.” Sanders’ budget framework allocated over $250 billion to the measure.

Other multi-million allocations in the bill are meant for the same purpose. For example, millions would go toward the research and development of low-to-zero emissions buses and ferries. Another policy in the bill would provide federal funding to build new charging stations for electric cars.

Outside of the legislative process, President Joe Biden has been seeking the same ends.

At the beginning of his term, Biden halted construction of the Keystone XL pipeline and placed a moratorium on new leases for oil and natural gas companies on federal lands.

But Manchin, the key swing voter, doesn’t love the policies.

Manchin criticized the policies during a CNN appearance in September, when he told reporters that companies were already switching to clean energy on their own where possible.

“Now [Democrats are] wanting to pay companies to do what they’re already doing,” he said. “Makes no sense to me at all for us to take billions of dollars and pay utilities for what they’re going to do as the market transitions.”

Manchin’s skepticism of these policies is rooted in concerns about the effects they could have on his state of West Virginia, where carbon-producing coal provides nearly all electricity in the state, according to the U.S. Energy Information Administration.

In May, coal provided nearly 5 million megawatt hours of electricity to West Virginia, while the next most used source, natural gas, provided less than 300,000. Green energy sources in the state provide even less: hydroelectric accounts for 134,000 megawatt hours, and non-hydroelectric renewables (such as biomass, solar, and wind) account for only 106,000.

In other words, nearly 91 percent of all electricity in the state is sourced by burning coal.

In an interview with a local West Virginia station, Manchin rejected the idea that the U.S. coal industry is “polluting the world and the climate,” saying that it “has no effect whatsoever compared to the impact of Asia.” According to the International Energy Agency, China pumped nearly twice as much carbon dioxide into the atmosphere as the United States in 2018.

Manchin argued that the coal industry “has to be saved, because the country can’t survive without it.”

But Democrats have been insistent on these policies to reduce emissions.

Biden has expressed hope that the country can cut emissions by 50 percent by 2030, a tall order on its own. Manchin’s longtime resistance to Democratic efforts that would undercut the coal industry make the goal even harder to achieve.

Rep. Alexandria Ocasio-Cortez (D-N.Y.), a proponent of the controversial Green New Deal, blasted Manchin for his opposition to the climate provisions.

“Any negotiations on climate need to ensure that we will come out climate positive. And that emissions math cannot be informed by fossil fuel lobbyists, who don’t even count methane.”

Sen. Tina Smith (D-Minn.) said that she was open to negotiations over climate provisions, but demanded that the budget “meaningfully address climate change.” On Twitter, she wrote: “I’m open to different approaches, but I cannot support a bill that won’t get us where we need to be on emissions.”

Rep. Jared Huffman (D-Calif.) was more caustic, writing on Twitter: “Manchin is why Congress contorted itself to legislate via budget reconciliation—because he loves the racist, anti-democratic filibuster. Now he’s blocking climate action at the behest of a fossil fuel industry that enriches him & his family.”