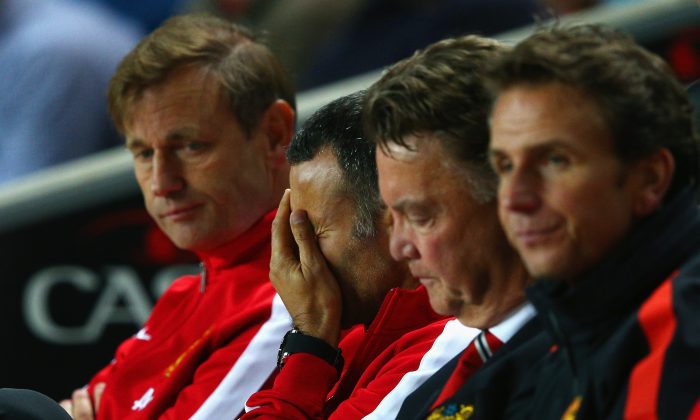 Man United have lost 4-0 to MK Dons in the English League Cup.

William Grigg put the home side up 1-0 in the 25th minute via a right footed shot into the bottom left hand corner.

Grigg got his second in the 63rd minute.

Benik Afobe made it three for the home side in the 70th minute.

Afobe would add another in the 84th minute to seal MK Dons’ crushing victory over United.

LONDON—Manchester United’s miserable start under Louis van Gaal took another turn for the worse Tuesday with a humiliating 4-0 loss at third-tier club MK Dons in the League Cup.

Hired to halt the decline under David Moyes, Van Gaal had already endured a loss and a draw in his first two Premier League matches before one of three possible routes to silverware ended in Milton Keynes.

A second-string United was playing in the League Cup second round for the first time since 1995 because Moyes failed to qualify for Europe during his only season in charge. He was replaced by the coach who led the Netherlands to third place at the World Cup.

Although Van Gaal made 10 changes from the team that drew at Sunderland, several established players featured.

Manchester United and Milton Keynes Dons are set to play in an English League Cup match on Tuesday, August 26.

The game will be broadcast on Sky Sports 1/HD, TalkSport Radio UK, and BBC Radio 5 Live in the United Kingdom.

MK Dons are 17/2 to win the game, as compared to 7/17 for Man United, according to OddsChecker.

New United boss Louis van Gaal is still in search of his first competitive win with the Red Devils.

New signing Angel di Maria should not be featuring in the match, but here’s a look at who might make the trip, according to ManUtd.com:

“Several fringe players and youngsters could be included with a trip to Burnley in an early kick-off on Saturday on the horizon.

Chris Smalling joined an extensive injury list when limping off at the Stadium of Light, leaving Mike Keane, Tyler Blackett and Phil Jones to form a largely inexperienced backline.

“There are suggestions new signing Marcos Rojo’s work permit will not be processed in time but Under-21 skipper Tom Thorpe is an obvious option if more defensive cover is required.

“Exciting striker James Wilson could feature in the squad.

“Arsenal loanee Benik Afobe, who was on the bench on Saturday, could play for the Dons if permission is granted by the Gunners.”