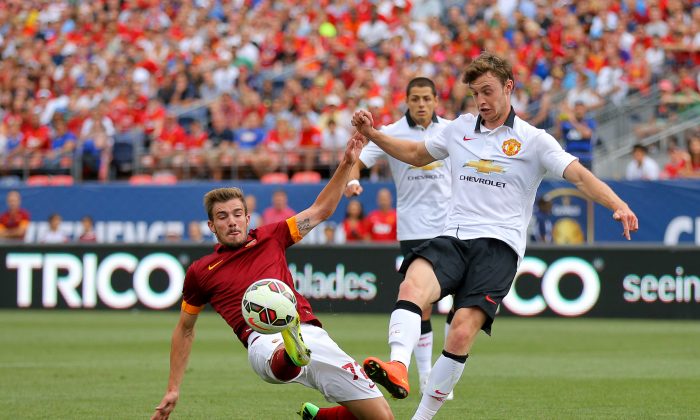 Mihai Balasa #72 of AS Roma defends a pass intended for William Keane #48 of Manchester United as Javier Hernandez #14 trails the play during the second half of an International Champions Cup match at Sports Authority Field at Mile High on July 26, 2014 in Denver, Colorado. Manchester United defeated AS Roma 3-2. (Photo by Justin Edmonds/Getty Images)
Soccer

Manchester United is set to take on Inter Milan in an International Champions Cup 2014 match on Tuesday, July 29.

Live streaming of the game is available on MUTV (for subscribers only), Watch ESPN, NBC Sports Live Extra, and beIN SPORTS CONNECT.

The game will be broadcast on NBCSN, ESPN Deportes, SiriusXM FC, and ESPN Deportes Radio in the United States.

The game will also air on beIN Sports 1 in Andorra, France, and Monaco, HyppTV in Malaysia, True Sport 1 in Thailand, and SuperSports CH 202 in Singapore.

The Red Devils have already beaten AS Roma 3-2 in the International Champions Cup already, and will will probably be heading into the match against Inter full of confidence.

New United boss Louis van Gaal has brought some young recruits with him, and one of them, striker Will Keane, has been enjoying the trip.

“It was good to experience LA as it was my first time there,” Keane told ManUtd.com.

“It’s my first pre-season tour and lots of fans have come out to see the players, which shows you just how big the club is. We’ve done a few appearances, which I’ve enjoyed as well.

“Training has been intense but good and everyone is trying to take on board what the manager wants. He knows it’s going to be a long process but everybody’s giving their all.

“Everybody wants to work as hard as possible and training is serious – we know we have a job to do. We’ve come over here and we want to win as many games as possible. We’ve been working very hard on the shape and structure of the team and want to deliver what the manager asks for.”

Keane is also optimistic about Van Gaal, saying: “Once a new manager comes in, it’s a fresh start for everyone.”

“The manager has a great track record and has said players’ experience is not just based on age; it’s about taking responsibility whether you’re young or old.

“And if you’re doing the job he wants you to do, he gives you the confidence that you’ll get an opportunity.”

See the current table below.